For all those following me on Twitter and so on - know one thing very well - i do love my Duardin. I collect pretty much every different Duardin that fits my style and i am know to convert them if they dont fit my liking to much. At this point i wasnt going to sway off my old beardy path...not even for tales of sigmar.

And then - GW dropped the bomb. New Duardins...well Fyreslayers but as every good and well read person knows:

They drink
They fight
they are...stump..i mean short in size
They dont let go of grudges
...
..
.

They shure are Duardin! But it gives me chance to start a whole new army dedicated for play ( havent been until know). Not only this, but the rumour surrounding the steamheads coming forth in Q1-2 really got my engines running.

My plan goes as follows: A Duardin-force. I will start of with the new release of the Fyreslayers and during the year will ad  either from the "old" Duardins or from the hopefully upcoming Steamhead forces.


The plan for the first three months looks like this: 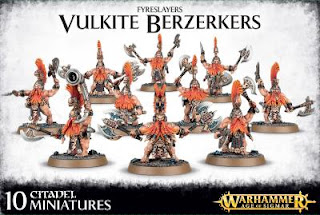 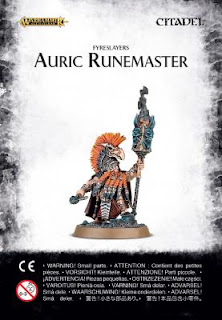 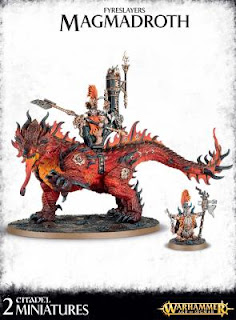 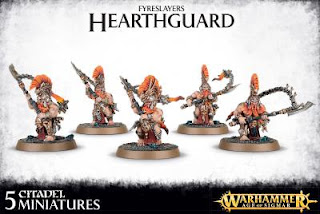 Those plans may very well change during these months ( which ones i paint first) but that will be the force at the end of those months.

The only thing left is to decide on how to paint and base those bastards.
Right now my basing plans go way of the rails of the usual (which i like :P). I plan on letting my clan of Slayers be stranded on a cold, wintery mountanworld with a lot of ice. They fire will be burning within them, allowing them to live in this waste without...welll..pants.

Painting wise im not so shure yet. Rigt now the battle is on between:

Well, still got a couple of day left. Until then i should have finished my mancave and be able to finally paint again ( had to stop for 2 months due to house moving, and man cave building).

I am really looking forward to painting these. It will be a new adventure since i made the big jump from GW Paints to the whole Scale 75 range. From what i heard they behave way different from my old paints so it will be a big challenge .....but we stumpy little bastards like that challenge. Aint that right men? "sound of axes being slamed against shields echoes in the background"

Until then - good hunting
Posted by Unknown at 14:57