Carnelian and the Forces of Order – Month 0

This is the first time I have ever blogged about Warhammer! I am very excited to be a part of the Tales of Sigmar. I’ve played 40k on and off since I was ten years old (which is 20 years ago). I had a small Vampire Counts army back in the day but have never completed a full WHFB army. I eventually drifted away from Fantasy into 40k only (Marines, Guard and Tyranids).

With the release of Age of Sigmar, I am very much back on the bandwagon. I have re-subscribed to White Dwarf and Visions and really looking forward to the new releases each week. I can’t wait to see the new releases in particular for Wood Elves, Beastmen and Goblins. Although I keep up-to-date with the community news online I’ve only actually played 3 games of AOS since it started. I am an extremely slow painter.

This year, I have signed up both to this blog and to the SELWG Smash (a 1 day AOS event on 19th March in London).

I hope to use this blog to motivate me in both painting and collecting a complete army – but with work, family and mostly non-wargaming friends, life often gets in the way!

My army so far - Carnelian leads the Stormcast!

I think I am the first Stormcast Eternal player to blog on Tales of Sigmar. I split the box set with a friend who was new to wargaming. He enjoys it but it is a very big time and money commitment to ask him to paint and buy an entire force.

So far the only AOS models I have are the Stormcast from the box set plus the Lord-Castellant and Gryph-Hound (I really love the hound model)!, the Knight Venator and the Knight Heraldor.

However I have only painted 5 Liberators, the Lord-Celestant on Dracoth and the 3 Prosecutors are a WIP. As you can see below I am painting them in the colours of the Hallowed Knights - for Gardus!

I will base them once the army is complete. 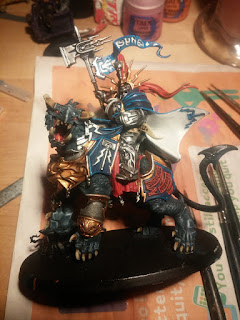 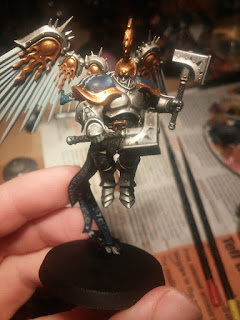 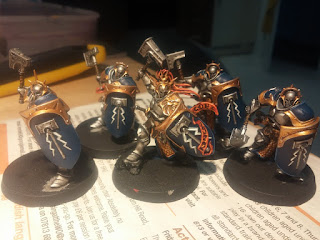 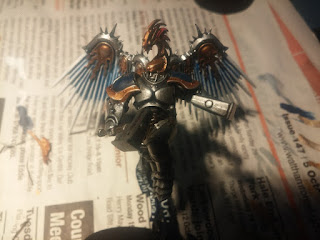 I still have the following to paint once I’ve completed the Prosecutors (hopefully this weekend):

My February purchases are already planned as two boxes of Liberators from Darksphere, (£24 each) which will leave me with £2 left over for March.

I will use the liberators boxes to build 4 special weapons and 6 normal Liberators and so bulk up two existing Liberator units to 10-strong each. At that point, including the Thunderstrike Brotherhood Warscroll, my army will be worth 16.5 pool choices under Clash Comp.

That still leaves me short of 3.5 pool choices for a normal sized tournament battle (which is what I assume SELWG Smash will be). I’m not quite sure what the Grand Alliance rules will be at SELWG Smash but I’m tempted to add a random Treeman to my army in March. I really want a big monster but I'm not keen on the Celestant Prime model and painting the swirly bits does not look like fun.

I fear my army may be a bit rubbish tournament wise. This is because there is a severe lack of long rang shooting to snipe the characters that bring all the synergy. However, I think this can be mitigated by the Thunderstrike Brotherhood which will help my units get to where they need to be to destroy my opponent’s synergies.

And, more importantly, this army will also be good fun to play against for more causal players as I don’t think it will be too smash face.

Of course any helpful feedback on army list or painting techiques is welcome!