Afternoon fellow gamers, so there's a change happening with one of my army choices for the Tales of Sigmar. Over the weekend a mate gave me a box of Tomb Guard just to test out some schemes as they had been sitting on their shelf for years untouched. So I sat down yesterday and spent the afternoon putting them together…. They're horrible to build!

Now I should expand a little, back in 8th edition I had quite a considerably sized Vampire Count army. I had lots of Skeletons and Grave Guard in that army and I absolutely loathed building them, if you're not familiar with them the bodies have tiny nubs to connect the arms and the arms have little sockets to connect onto them. By the time I finished building them I was sick of my life, all it takes is one knock when drying and they fall off; hell even when the models are built and painted they were fragile and I was constantly fixing them up.

It's disappointing that the Tomb Kings are the same, because I cannot sit and do that yet again with another army, so unfortunately the Tomb Kings are being dropped for the Tales of Sigmar. Who knows maybe I'll revisit them down the line but being so soon since I built my Vampire Counts I'm not going to do that again.

So it looks like one of the runner ups from my previous post is now going to be promoted to be my project alongside the Stormcast Eternals. It was a huge toss-up between the Daemons of Tzeentch and the Night Goblins, but as mentioned with the abundance of Chaos blogs there was really only one choice! 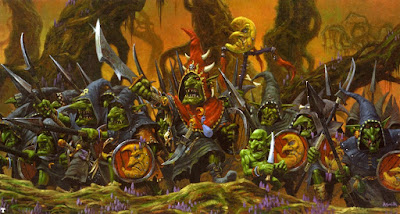 The Gobbos are coming to the Tales of Sigmar!!! I know I was going to wait for the Orcs release later on this year but if I focus on the Night Goblins and squigs for the first few months I can then decide how I'm going to add the Orcs to the army. Most likely it's going to be the Savage Orcs as I just absolutely love the look of them, however the Getting Started standard Orc box set is also enticing. But anyway that's going to be down the line, to start with it's all about the Night Goblins and their Squigs, the Age of Squigmar (Yes I've seen the Hashtag) is coming to the Tales of Sigmar!
Posted by Chalmers at 16:49