I'm really pleased to be a part of this. I've enjoyed reading what everyone's got planned, and I look forward to making the most of that extra spark of motivation and inspiration you can get from sharing your hobby.

Like a few others I've had my toe in and out of the Warhammer pond for twenty years now. I've been pretty consistent with 40k, but failed to keep up with WFB even though it got me into the hobby. Who remembers the starter box with High Elves and Goblins? Was that 4th?

I've admired the newer models from a afar for a few editions now, but never felt I could commit to collecting 'an army'. To be honest, I was also quite put off by the whole 'you must have X (monstrous cavalry for example) or don't even bother' culture that seemed to have taken hold.

Something about AoS, maybe the smaller unit sizes. Or just playing with the models you like rather than fussing too much about 'the meta'. I can't put my finger on it, but something, reminds me of the excitement clutching a box of 'skeleton horde' or a blister of mummies in the old days. Yes, I miss the World that was, but Age of Sigmar has me more excited about Warhammer than I've been for decades!

I want to create a force of Warriors of Chaos and Daemons of Chaos in the thrall of Tzeentch. I have some warriors to paint for next month. On the wishlist: Horrors, flamers, a lord of change (Fateweaver?), a Mutalith Vortex Beast perhaps. I can be a bit fussy once I have an idea and I anticipate some conversion work.

I usually tend towards a "dark and gritty" style when painting, and so I intend to use this project as excuse to go really berzerk with colour: blues, pinks, purples, yellows, greens and sweeping blends there-of. This will be a riot on the daemons! It'll be a bit of a breath of fresh air after a diet of gun-metal, rust and chipping in the dark millenium. I intend that most of the "mortals" will wear the iridescent blue/green metallic armour you can see on GW's studio Alpha Legion army (for the Horus Heresy). 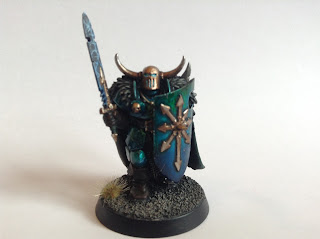 Here's my test model, trying to achieve that 'metallic lacquer' on the chaos warriors. I tried using LOTS of colour, but it just wasn't working for me; best reserved for daemons I think. I'm sticking to blue/green tones on the mortals.