Welcome to my Tale!

When I was given the opportunity to join in the Tales of Sigmar I didn't need asking twice. This little project combines two of my favourite things; starting new armies and getting bargains. With a strict budget of £50 a month, I thought it was an excellent opportunity to recycle some of the odd Chaos models I've got lying and start hunting down some bargains for one of the Old World's less popular races - Beastmen.

Before we discuss the stars of today's show, I suppose it would be fair to mention the "also rans", the "ones that got away". I'm a bit of a hobby butterfly, so I have no end of little projects that really need finishing; Bretonnians, Wood Elves, Ogre Kingdoms and Tomb Kings are my current Age of Sigmar armies that are half-assembled and thoroughly unpainted. I'm working through a Night Goblin army at the moment, but that'll be done in three weeks for a tournament so I decided it'd make for boring blogging if I completed my army in month 1.

My armies just weren't really grabbing me. I'll definitely get the Bretonnians finished at some point, maybe keep the Elves and probably sell the Tomb Kings. I knew there was an army out there for me, I just couldn't quite work it out. Until I saw this...

This single miniature instantly turned my soul to Chaos. It was awesome. I have no idea how to pronounce its name, but it's called Brunchaath the Vile and he's a Gabrax Tain. I have no idea what any of that means either, so don't worry. 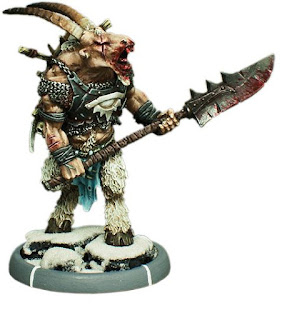 It's a model by Mierce Miniatures which I'd heard about, but never checked out. This model inspired me to start a Beastmen army and then I found an albino version. I decided I would paint my Beastmen in this style. 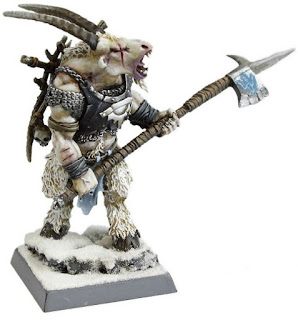 I was sold. The Beastmen herd was basically already here. With that, I took to eBay to scout out some bargains and gather the army! I've always wanted to build myself a Cygor and the Ghorgon is definitely too cool to not include. That's at least one month's budget right there! And the horrendously ugly Jabberslythe, definitely a must-have. I found myself getting really enthusiastic about this army and decided to go ahead with it.

I'm always a big fan of themes in armies, a strong theme can really tie an army together. The question is, how to theme this army. Do I dedicate it to one of the Chaos pantheon? Or many? I have some cool ideas for converting both Khorngors and Pestigors, but a single themed army might have more visual impact on the field. What do we think, dear blog readers? Khorne, Nurgle, Tzeentch or all three?

Single god themed would make for some fantastic visuals, especially when I expanded in to include all the Chaos Grand Alliance units. But then multi-god sounds tempting as I have some great ideas for converting units to suit each god. I'm seriously tempted by Nurgle, but I'll take suggestions and decide in month 1.

Until next time, happy gaming!