The Light and the Dark - week 0

For me, one of the great things about Age of Sigmar is its epic scope. We're talking about an endless struggle between good vs evil on an interdimensional level, overseen by godlike figures. So for Tales of Sigmar I've actually chosen a snapshot of the best and worst of order and chaos to work on over the year.

The first project I started was an all-female Stormcast angels army. The Prosecutors are without a doubt my favourite Stormcast model - they're phenomenally detailed, full of movement and look tall and imposing on the table. As a symbol of the virtue of Sigmar, you can't go past them - so what better than an army of angels to represent divine justice? 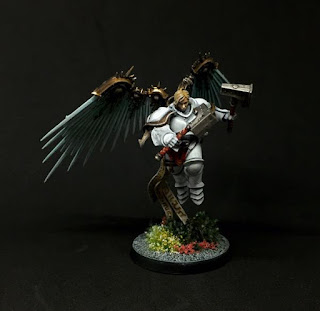 I've only done one test model so far, which you can see here. The idea is that they're wearing white marble armour. I unsuccessfully attempted a couple of striated marble schemes, before just settling on a simple but clean method of layering up from mechanicus standard grey, through celestra and ulthuan grey, up to a final highlight of white. The heads as you can see are a small conversion - they're heroic scale female heads courtesy of the Dice Bag Lady. The army will be 80% angels, with some support units and a dracoth.

That's the plan anyway.  It got a bit derailed when Archaon was released and I was forced to impulse  buy him. He's the polar opposite of the angels - the big badass ruler of chaos. And who can say no to a three-headed dragon? I've spent about 8 hours on him so far, I estimate, and have gotten very little done. I've never attempted anything this big before, so every step is a learning experience. In fact, he's so big and so difficult to hold, that in working on the skin, I've rubbed the undercoat clean off the touchpoints I have to use to steady the model. Bugger. 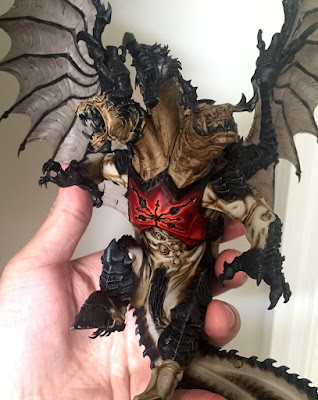 I'm painting Dorghar and Archaon up with red armour, to match an existing Beastmen army, that I'm rebasing as servants of Archaon. I'm also making a bit of an adjustment to the colour scheme, in that I'm painting all the heads the same colour - I just think it helps unify the palette more.

And finally, here's the scheme that I'm rebasing my beasts to. It's the lava bases from the GW advent videos - a little time consuming, but totally worth the effort. 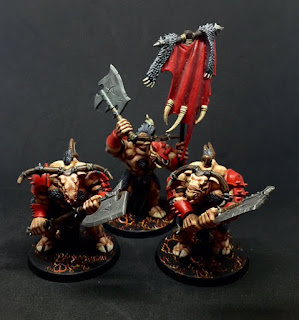