Wardens of the Realms - Month 0

I've always been fascinated by the "Tale of Gamers" (or "Choix des Armes", as it is called in my native language) from the White Dwarf magazines of my youth. Reading about the rythmic growth of (often) strong themed armies, battling and growing at the same pace, was always a highlight of my young gamer reads. What will he add next time ? What's the story behind his new units ? Spanning over a few months, it was usually the opportunity to build up a force with a strong theme, color scheme and background, from scratch to completion. Often a good alternative to the more "vanilla" armies you could see in the other official books or stores (there was almost no internet back then).

At the time, I didn't have enough gamer friends around to launch the idea, and never took the time to join a community that would do it, even less reporting it to a broader audience. Thanks to James Chalmers and this website, now is the time !

I've been a lifelong fan of the Warhammer universes, and to me Age of Sigmar is an interesting and refreshing new take on fantasy battles, from the backgound to the scenario-driven gameplay. I can't wait to paint up all the troops I've bought since its release ! Having several factions and wanting to do many more, the choice was tough (I spare you my qualms here, they can be found on my TumblR) ; after a long brainstorming, I finally opted for the Stormcast Eternals. 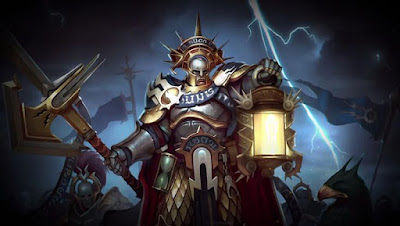 Why is that ? Considering the potiental length of the Tales of Sigmar (James mentioned one year), it had to be an army that could grow quite big, not a "one shot" completed with a few heroes and a handful of units... My idea of using the Stormcast fitted the bill : I'd like to have enough of Sigmar's warriors to reenact all the scenarii from the campaign books (AoS, Ghal Maraz, Battletomes...), which means, to my opinion, a LOT of Stormcasts. Besides, a broader sample of troops will mean more choice when it will come to create or play with battleplans including a sudden teleportation of golden warriors. Once I had the faction, it was time to flesh out its fluff ! 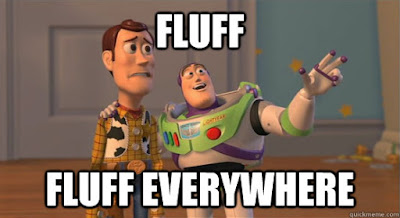 I didn't want to play vanilla Hammers of Sigmar, nor the most famous Stormhosts ; I usually prefer to create my unique "chapter"with its own background (yes, I used to play Space Marines - how did you guess ?). After lots of overthinking (the time you can spend thinking about little toy soldiers is just amazing), I had finally background, heraldry and philosophy of my Stormhost : The Wardens of the Realms.

Each Stormhost was created by Sigmar with some specific intent, and its origin can be broadly split in two categories : either it is former heroes picked from the same area/realm, or heroes with a similar mindset (faithful, wrathful, brave...). My Stormcasts fall in this later, with a tiny bit of the former.

The Wardens of the Realms were hand-picked by the God-King because of one specific characteristic : their selflessness. In their former life, all the Wardens were brave men and women dedicated to helping and protecting their peers, at the expense of their personal safety and well-being. Not all of them were warriors ; they could also be doctors, masons, simple peasants... But at some point (or through their whole life), they were exceptional individuals that went to great lengths to help people or communities in dire need. Sigmar saved them and Reforged them in mighty celestial heroes, who will have the duty to protect the Free People and make sure the Stormcast Eternals keeps a firm grip on the reconquest of the Realms.

One of my first questions when I started reading the new fluff of Age of Sigmar was "Ok, the Sigmarines take control of the realmgates and send thousand of soldiers to go smash some Chaos dudes, but what happens to those gates once the armies used it ? " 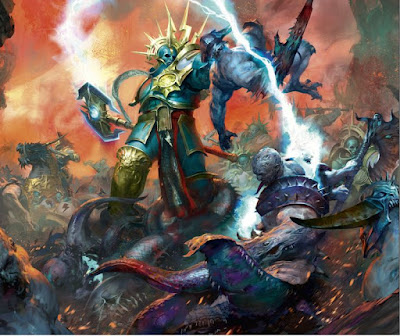 To conquer something is not just about the fighting, it is mainly about consolidating the land you won and making sure nobody takes it back, even more when it is strategical points to get reinforcements. The way I saw it, once the conquering armies got throught the Realmgates, they had to do something to protect these hard-earned assets, and switch from an agressive stance to a defensive one to make sure nobody steal their prizes (and gets to Azyr).

To my mind, trailing closely after the Stormcast fury come the Free People from Azyrheim, building fortifications and small military encampments/towns in the purpose of 1/defending the gates and 2/welcoming the traumatised tribes who were living under the whips of Chaos lords. Bringing back people together and some kind of civilization to these wasted lands.

Even if Stormcast Eternals are seen as a more offensive elite army like the Space Marines, their power is also needed to protect strategic points who would'nt hold the enemy pressure without them. The Wardens of the realms are just that. They were not in the first wave of Stormhosts that assaulted Gates and took over Realms, they were part of the second ; they are sent to defend and protect the free people gathering around the gates. Their lightning-speed is used to make sure they are always where they need to be. When they go campaigning, it is almost always to take back an asset or go help allies under attack. They will die for the people they protect. You got the idea.

Let's talk about painting ; Stormcast Eternals remind me of paladins and chivalrous figures of our ancient medieval times, kinda pumped-up Bretonnians on foot (with wings). To that prospect, I looked for a color scheme that would be an inspiration from real-life knights dedicating their lives for the greater good (no, we're not talking about Tau). I quickly found my mark : the Sovereign Military Order of Malta, modern descendants of the Knight Hospitaliers. 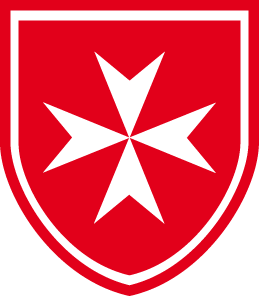 They were a knightly order issued from a religious Roman Catholic institution, entirely dedicated to helping the poor and helpless : their Motto is "Tuitio Fidei et Obsequium Pauperum" (Defence of the faith and assistance of the Poor). I love the white on red colors (above), so decided to go for that scheme ! At first I was considering a steel taint for the armor to better emulate this knightly look, but then I wondered what was the point to play SE if it wasn't to learn to paint gold ?

The Wardens of the Realms have eight known Warrior Chambers, each dedicated to one of the Realms (some speak of a mysterious Ninth Chamber...). They can be distinguished by the plume on their crest (Red of Aqshy, Green for Ghyran, Brown for Ghur, Etc.). The other Chambers (Exemplar, Harbinger, Auxiliary...) are "neutral", built without this geographic specificity.

Sigmar organised each of these Warrior Chambers with heroes originating from the realm they are now vowing to protect... The God-King thought they would be even fiercer if they fought for the land they lost an Age ago.

Even more than its peers, this Stormhost is often spread all over the Realms, each Realm hosting a Warrior Chamber and its eventual support. However is not a strict organization, and on many occasions brothers from various realms have fought alongside each others.

So here we are ! After this wall of text, you can guess where I'm going. I'll probably start with the Warrior Chamber dedicated to the Fire Realm, to match the Bloobound that I'll start painting soon. Althought the Campaign in The Age of Beasts by our colleague Hobby Hammer makes me consider starting with Ghur instead...  I will decide in the following days. 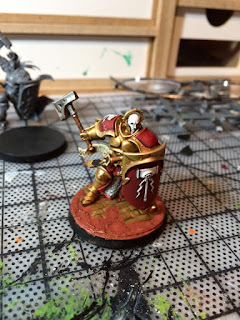 I have made a "test model" for my Wardens and I am really happy with their look. My only concern now is to work on the base ; I want to echoe at the same time Azyr and the actual Realm they are fighting in, so a mix of civilisation and savage conquered land. Hence this WIP tryout with gold pavement and red earth for Aqshy. But the gold is maybe too similar to the Stormcast armor to "stand out"... And even more with the Red earth from Aqshy Vs shields and pauldrons. I'm hoping to settle this issue before February and start painting : Month 1, here I come !
Posted by Jim at 21:30

Email ThisBlogThis!Share to TwitterShare to FacebookShare to Pinterest
Labels: age of sigmar, month 0, Order, stormcast eternals, wardens of the realms