Dan here, I've had a quick chat with Chalmers on Twitter and he is happy for any AoS themed posts to sit alongside our own hobby projects.

So I'm taking a break from planning out my Seraphon project to tell you about my weekend - where I participated in Games Workshop Chelmsford's first ever AoS tournament.

So just a bit of context about me to set the scene - feel free to skip down to the tournament report highlighted below. I've been playing GW games since 1999, with a few years break whilst at university. I'd describe myself as a hobbyist rather than a gamer and personally only play a unit in battle if it is fully painted. I've had Warhammer since 5th edition but was mainly a 40k player - the complex ruleset and sheer number of miniatures I needed to build and paint for WFB meant that, whilst I loved the models and the narrative, I could never focus myself enough to get an army built and painted.

I gave AoS a try in December and was hooked - great models and fantasy setting but with a lower model count and easier rules. When Ron at GW Chelmsford told me he was setting up a tournament I was keen to get involved to support the store and the game.  It would also be another of my hobby resolutions met.

Now as I said I'm not really a gamer, before the tournament I had played 3 games of AoS with my Night Goblins (they are painted!) against my Dad's Dwarf army. I have never taken part in a tournament and haven't played a GW game with anyone other than my Dad in 10 years or more since my friends dropped out of the hobby and didn't return.

The tournament was hosted by Ron at Games Workshop Chelmsford, so thanks very much to him and drop in to say hello if you are ever in the area!

We were using the Azyr Comp format which can be found at www.louisvillewargaming.com/Files/AzyrComp.pdf

There were no scenarios or sudden death and 20 point forces - with the winner over 6 rounds being the player who had destroyed the most points of enemy models - nice and simple.

Unfortunately a few of the players who had signed up couldn't make it on the day for one reason or another. However this worked out well because it meant we went from a bracket format to a round robin so everyone got more games! 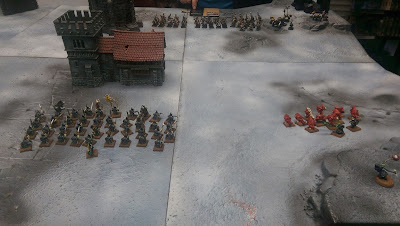 My first game was against my Dad and his Dwarf army and in a battle that has been retold across 15 years and 5 editions my Goblins marched in to the teeth of the guns and got slaughtered. I actually reached his lines this time and the Goblins gave a reasonable account of themselves but had taken too much damage to stay in the fight. 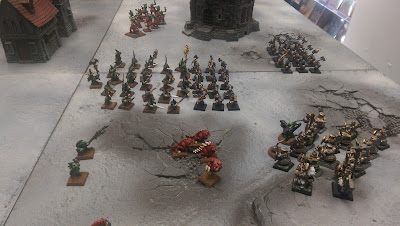 Game 2 was against Issac and his Seraphon - fear the ripperdactyl! He fielded 3 of the winged beasts alongside 10 Temple Guard, a Bastiladon and the Astrolith banner Saurus. The birds managed a turn 1 charge and smashed in to my main block of Goblins and must have rolled 50 or more attacks with all their special rules and rerolls - I can see why they are so popular on the tournament scene! In my turn 1 the fanatics charged in to the Ripperdactyls hoping to free my block of Goblins but it was not to be - with 2d6 attacks the fanatics put out a pathetic 1 wound before being eaten. This tied my goblins up for the whole game and left the rest of my force unable to defeat the dinosaurs on the baseline.

Game 3 against Dan and his Skaven - a classic horde vs. horde battle. The Goblins had the upper hand over his Clan Rats but unfortunately couldn't stand up to his Stormfiends and warp lighting cannon. None the less this was a fun game with Skaven warp tech shenanigans and Squigs going wild - classic Warhammer.

My final game against another Dan (5 players and 3 called Dan!) and his Stormcast. Dan had been wreaking havoc with his force all day and would end up in joint first place with 3 wins and 1 draw. Needless to say I didn't give my poor Goblins much of a chance in this one. However my opponent's lack of familiarity with the new Goblin rules allowed me to pin down his alpha strike from teleporting Stormcast with the fanatics abilities to interrupt the charge phase. My Warboss bravely held this unit up for a turn whilst the rest of my horde ran toward the main Stormcast line. Eventually I was wiped out but had killed over half of the Stormcast army - my best performance of the day. If I had kept my Shaman alive, who was killed by the alpha strike whilst skulking at the back, I may have even been able to win this one!

So I went 0-4 with my Goblins but had a fantastic day playing against some good blokes so thanks to Ron for hosting and the guys for playing me in my first GW tournament.

I have to say that over the course of my 4 games I learnt a lot about this army and the game and if I could play again with the same list I think I could do better! SO what did I learn about Goblins, AoS and competitive play?

Thanks for reading guys - over to you in the comments box; have you played in a tournament yet? What rule set do you use for competitive play? What should I change about my Goblin list to make it more competitive?