Carnelian and the forces of Order: - Month 1

At the end of January, my only aim for February was to purchase 2 boxes of Liberators.

When it was announced that the Tomb Kings range was being discontinued, I could not resist the last opportunity to get my hands on some of models from that range that I have always admired. I ended up buying the Tomb King with Great Sword, a box of Tomb Guard and a box of Necropolis Knights - all of which are now waiting for me at my local GW and local FLGS. I managed to get the Necropolis Knights at 20% discount which was sweet, so the whole lot set me back a total of £61.80 which means that I am £11.80 over budget into March.

I was so pleased to get the Necropolis Knights. Those models are just fantastic.

Eventually I will expand this army with Neferata and some Morghast Archai when the time feels right. I may add some Skeletons at some point as the Tomb King Skeletons box set is still available. However, I have heard that this kit is not as good as the Vampire Counts Skeletons box. In any event I would be happy for my Tomb Guard to stand alone as a personal body guard to the Tomb King, so skeletons are low on my priority list.

In the meantime, my Tomb Kings will act as allies for my friend's Khorne Bloodbound army so that our armies are of roughly equal size under SCGT comp.

In Praise of Age of Sigmar

February really focused the benefits of Age of Sigmar to me. I fancied picking up a couple of units of Tomb Kings and I did. In the past, they would not have been easily playable until I picked up around 10 more boxes of that same army. In AOS I can chuck them straight into my Stormcast army as soon as I have built them.

I can even just hand my Tomb Kings to my friend when we play - he is new to AoS and has less models than me in his Khorne army. I've told him to learn the 3 warscrolls for my Tomb Kings units and he will be good to go. There is no hint of power-gaming by mixing alliances since the synergies don't cross armies. Since the Death faction is separate from Order or Chaos, it will not be unfluffy either.

In terms of painting progress it was, as always, much slower than I had envisioned. I have almost finished my Prosecutors entirely but boy did the wings take a long time! On the first model I wasted a lot of time before finding a decent technique so the last two were not so painful: 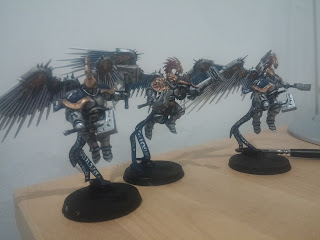 I have also basecoated and washed my Retributors and hope to have them highlighted before the end of the month: 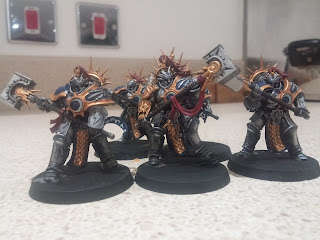 If anyone has any tips for photos using just a camera phone and single desk lamp, please let me know!

My unpainted models are a unit of Liberators, a Gryph-Hound, a Lord Castellant, a Knight Venator and a Knight Heraldor to paint up which I should hopefully get finished by end of March as it's only 9 models....

I am planning to base this army using Lustrian Undergrowth as per the Hallowed Knights featured in this months Visions. Following their inspiration, I might have to add a giant bird to my army too!

Finish painting my Stormcasts, as above.  In terms of purchases, I still need to bulk out my Liberator units but I am also particularly fond of Genestealer Cult.... so March may be tricky....
Posted by Carnelian at 23:49