Celtic Lords of the Glen 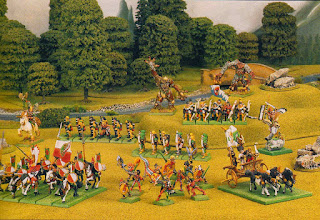 I'm going to work on a 'good guys' army too to fight against my Chaos invaders. This one was an easy choice, I've always loved Wood Elves since Mike McVey's Studio Wood Elf army for 3rd Ed wfb was featured in White Dwarf, some really neat conversions and just a cool Native American Indian and Celtic look which is also how I like my Wood Elves to be, a little primitive and savage and not to be messed with. The other thing which makes me want to bring these models into AoS , is they are the ultimate Skirmish fighting force. 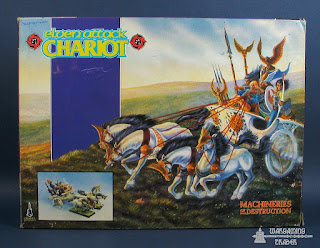 My first purchase for this army was a mint Elven Attack Chariot, costing £50. I've owned this model in the past but had to sell it. Never managed to paint it before, so really looking forward to this . Just need to figure out what 'counts as' rules to use , and what size base to mount it on. Next up will be the elf cavalry, the eagle conversion, some spearmen, archers and finally some wardancers. I may add some newer models to the fray as well and some other races like some Sylvaneth or some Halflings, but we'll see how it goes.