"Through silent screams of his fever wracked mind he heard the foot steps approach.
"My lord Jorund, the healer has arrived"
Jorunds head bobbed in aknowledgement, it was all he could do to communicate whilst holding back the anguish he held within.
The healers arrival was heralded by his stench. The sweet rancid smell pervaded all before it, with the air of something that would linger long after its owner had departed! The shadowy figure loomed into focus. Swaying unsteadily on odematous legs swollen beyond all recognition and leaving behind him a trail of serous slime. His flesh was pallid and bruised and open sores teemed with flys and maggots. He gazed down greedily at the figure of Jorund. His beedy yellow eyes crawled over the semi recumbant form of the once proud warrior.
"and how is the patient doing?" came the rasping voice of the deathly healer.
"i'm dying" Jorund gasped
"ohh now now" the laughter bubbled inside the healers throat, continuing and building until it was echoing around the walls of the chamber.
"no, i'm sorry but i'm afraid you are going to be with us for some time to come" "

As part of this project i thought i'd add a few back stories to some of the characters that will form part of my force. I've wanted to paint this figure for ages. It is such a characterful model from the sagging jowels on his face to the crawling maggots under his cloak.Although initially this may look slightly at odds with the rest of the Khorne forces fromt the starter set i hope things will take shape both physically and with the back story over the coming months.
Painting the flesh was quite a challenge as most of it is hidden. The bruised and diseased look took a few glazes to give the depth of character but with such small portions available i struggled to pull it off convincingly. Still it was great fun to paint. 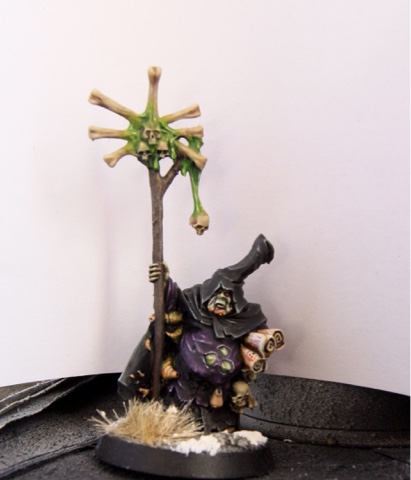 This month I have also been able to finish my first unit of Khorne blood bound. 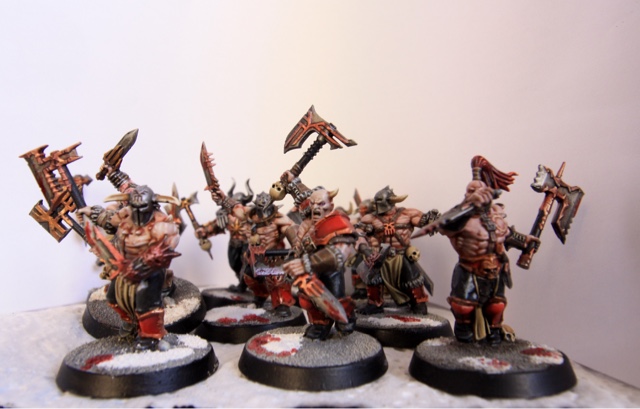 It might seem that I have already lost focus with this project given the khorne and nurgle units but hopefully over the coming months things will become clearer as for once I think I might have a plan...a chaotic one but still a plan...
Posted by rand al'thor at 22:34