Firstly, Wow! This has taken off! Great to see so many people posting, it's great to see all the lovely armies coming along!

Normally 99.989% of my hobby is spent hunched over a table painting stuff, but this month I've spent most of my free time actually playing! We've now got so many new players all wanting to game I've had to do a lot of buying, building and list writing so I can get something on the table and give them a battle.

We're playing 100 Pool (SCGT) games so I've blown my budget out the water straight off on a Khorne themed army (I'll post the army list I've been playing with at the bottom).. Anyway, at least from now on I can concentrate on getting some stuff painted.

So the main models I've actually got done is some of my Marauders. All converted from Blood Reavers because they're awesome models.

I wanted the core of my army to look non-specific (god alignment-wise), so I could happily mark them Khorne one game and Nurgle the next, or whatever. Coming up with a colour scheme that doesn't lean towards one of the Gods isn't easy, once you eliminate their specific colours.. well there isn't much left! So they're mainly black, brass and silver. I really needed an accent colour though so decided on a very deep red, any specific Khorne models in my army will be a much brighter, blood red.

I knew the focal point on these models was always going to be their pale skin so I spent a while trying to get that looking nice and then painted the rest of the model as quick as possible, there's going to be at least 20 of them after all! Also went for a snow base scheme, think it helps balance out all the black.

I've also managed to get a test model painted for my Warriors. Again, wanted that classic black armour look. 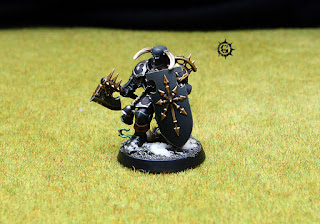 This being a test, I've used both Silver and Brass on him, but I think I prefer the Brass so will probably do more of that on the rest, Happy with the test though so ready to crack on with the rest,

So, as I said, I want a core of generic and then expand into one God or another, since I had to get an army on the table to get playing and since I already had the AoS starter set, it seemed easiest to start with Khorne,. Basically the Bloodsecrator is such a good buff to them, it just made sense. 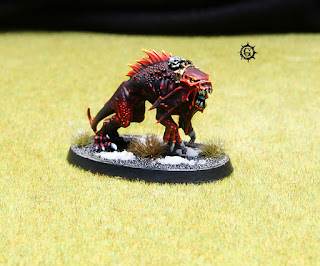 So far, in all my games I've been summoning Flesh Hounds, they're great. I already had 2 of these models which I bought from eBay a while ago to make a (now aborted in favour or AoS) Mordheim Warband, got 2 more with my AoS set and a swap, 1 more from eBay and I had 5. Got one painted up as a test scheme..

Quite happy with the result, but not convinced with the metallic teeth. Seemed like a good idea at the time, but hey ho.. that's why it's a test. Might change it.

Summoning is great and all, but I've had issues with it for this army, which I'll go into in army selection. But summoning the Hounds has been great, They can re-roll charge rolls so you can summon them and have a good chance at getting that difficult 9" charge off, plus they're hitty with 4 Attacks each and can unbind spells, which they're almost always within range to attempt.

So that's all I've got painted but I have got a fair bit built. 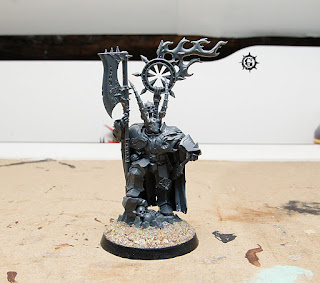 Got my Lord of Chaos finished. He got nerfed pretty hard when the Chaos book came out, no more bringing on units out of nowhere! But to be honest, I agree with the nerf, that was stupid powerful and I was already worried that I'd be bringing on a unit of Knights behind their lines every single game and it would get boring. Anyway, he got a new rule that he can turn into a Demon Prince or a Spawn so I'm happy. Plus his Reperblade can do 2D6 damage once per battle, so I gave him an extra big one!

Also got the Knights built. 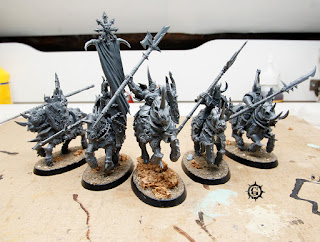 So far they've been quite good in game, even with only 5 of them. That's good, cos I don't fancy painting 10., always struggled to get through painting cavalry. I gave the models Glaives because it looks the best, but I didn't find they were great in game. I never killed any unit on the charge (generally send them into tough stuff) so I think it's best to give them Ensorcelled Weapons for the extra attack. A 4+ Save and 3 Wounds each make them pretty survivable.

Got the rest of the Warriors built. 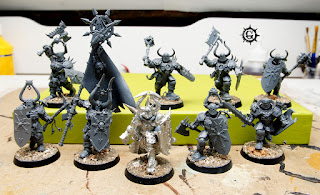 These were difficult! I'm using the Blood Warriors from the starter set. They're fantastic models, but they're made so that simple head swaps isn't an option! Most of the heads are attached deep into the torso. Even with a grinding tool on a Dremmel, it was hard work to get them off without destroying their gorgets or shoulder pads. It seems the box sets you can get of them are more multi-part which would make it simple, but I had these and the box sets are expensive!

Really happy with the result though. Exactly how I wanted them to look. Especially pleased with the Standard Bearer, he's made from about 4 or 5 different kits!

I decided early on that I needed 2 sorcerers in my list and now that my Lord can turn into a Spawn should he die, I got a friend to pick me up Sayl & Nightmaw when he was at Warhammer World (I feel it would have been daft to pass up on!). 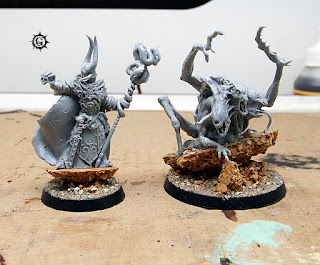 Really nice models! Nightmaw looks straight from The Thing! Can't wait to get some paint on him/it. Since I'm going with the snow scheme I've tried to make the basing so there's plenty of places to add icicles.

Ok, anyone who read my first post might be wondering where Archaon is! We'll he's built and he's got a bit of paint on him but not much! I will be taking my time with him and I'm concentrating on stuff I'll actually play with in every game, I have got his base mostly done.. 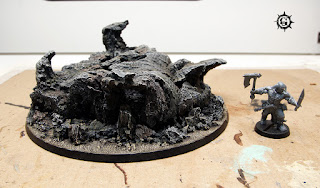 It's crazy big! I've pretty much finished painting it.. but it'll look a lot more interesting when all the snow and ice is added,, I hope.

So I mentioned that I've spent more time than I normally do playing and list writing so I'll include what I'll be playing next.


Originally this being a Khorne list, it was all combat but it wasn't doing very well. Turns out you absolutely have to have some shooting to take on things like Ripperdactyls (don't get me started!). Hence the Cannons and the Slaughterpriest, Hope these change help! I'll let you know next month!

Wow! That was a long post! My apologies, and well done if you made it to the end!

PS: Just realised I said I'd mention our experience with summoning, but this has gone on long enough. Long story short.. I've decided to keep summoning to a minimum in my army.. I'll try to write an extra post in Month 2 as to why, but why we're also using the Summoning Pool.