Change of plans. I got through three of the Bones Dracolisks … and decided I didn’t really want to struggle through all that vinyl right now. Not a lot of models but certainly a lot more effort than I can put into the project right now.

So I moved back to my Ironjaws horde from the Fall, and was loving the Blorc kit – a chunky plastic kit that I can clean while watching TV with the lady and don’t have to GS?? Unreal. I’m also a Destruction player at heart and a sucker for an undersquig, plus I’d finally have a real excuse to get my two Araknaroks painted!

But even that was looking like a lot of work, when I’d rather be playing AOS next month, rather than sometime in the early summer. Enter my Daemons of Khorne, an army that I built for 40k 4E, packed away for years, had painted by a friend in exchange for some Tomb Kings, packed away for years, and then played in my first game of AOS last summer. The army is painted, on round bases, of a decent size, and makes up a formation (and change). All of what I’m looking for in an AOS army!

Everybody is getting new basing, starting with big boy here: 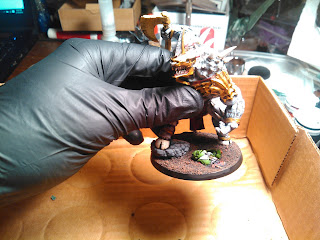 And I mean everybody: 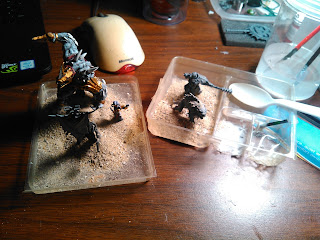 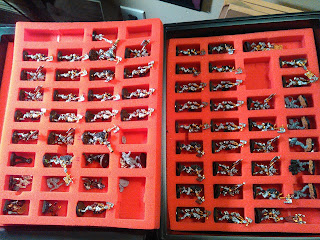 The plan is to scrape or cut off the existing flock – a chunky blend I bought from GW when I was 20 and used for all my armies around that time, which is awkward when I come back to add to those armies now, after I’ve embraced the 50lb bag of dried, sifted playground sand – glue down finer sand, then paint it Battlefield Brown (like all my armies have been Scorched Brown, a color I’ve come to really dislike) with some kind of drybrush / wash / etc. Basing isn’t my strong suit, but it can be a lot better on these lads.

As for the 48+ Bloodletters, they look a lot like this: 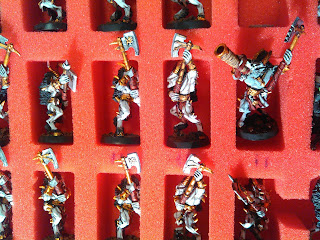 Pretty sure my friend left off the teeth and the eyes, so I’ll hit those as I process their bases, along with touchups as needed. The Bloodmistress, for example, could use some loving, along with a fresh hair color …

From here, I’ll be adding Skullcannons to bulk up the army SDK / Pool-wise. Planned conversion is juggers with plasma cannons (!), with something like seven (!!) in the end, though admittedly I should make eight for reasons. I have a fleeting worry about beardiness … but it’s Khorne Daemons heavy on the Bloodletters, so meh! A Soulgrinder wouldn’t be ridiculous to cap things off, though most likely that’ll be a Maulerfiend or FW nasty, since I’ve already done a Defiler and a Soulgrinder for different armies, and am pretty burnt on that spider-tank kit.

Be back with more before too long. Hoping the project rips along, given that it’s largely a salvage job with a few characters and bigger things for spice! Then it's onto the carnage!