The City of Silence: Intervention at Creaky Hall

Welcome to this update. This is my first Battle Report, so I'm trying out some new things here. I've mixed a bit of fluff into the narrative to capture those key moments. Hope you guys enjoy it.

"It's not a terribly impressive place, is it?", asked Rein. Strident upon his steed, he cut an impressive figure, though less so than lord Jotne. "Old Rot-Bones never did care for the trappings of his power. Quaint, he used to call it.", Sjo called Nobody expects a three-hundred year old Necromancer in a run-down shack like this, he said. They didn't, or else they wouldn't have broken in, stolen his bread and stabbed him in his sleep. Haunted them all to death he did, not much good that did him". Lord Jotne stirred in his saddle. Smelling the air and sensing the flow of energy, he knew they had been met. Not Chaos, he thought. They would be behind them, not in front. Something different, something pure. Ancient energy blazed in front of them, blinding all three. Out of the light walked reptillian warriors and two massive beasts. One, great and horned with some sort of golden circle upon its back. The other, thickly plated and carrying a vast, starbursting crystal. Why they had interceded he knew not, but he had orders to carry out, and foes to slay. "Form up! We need to seize that house. Slay those you must, but Creaky hall is our objective. Ride!"


Game type: Ambush in the Cursed Temple.
My objective is to get to the house, ransack it for a magical artifact, and get away. The defender sets up a few units in ambush, and otherwise comes in in his first hero phase. 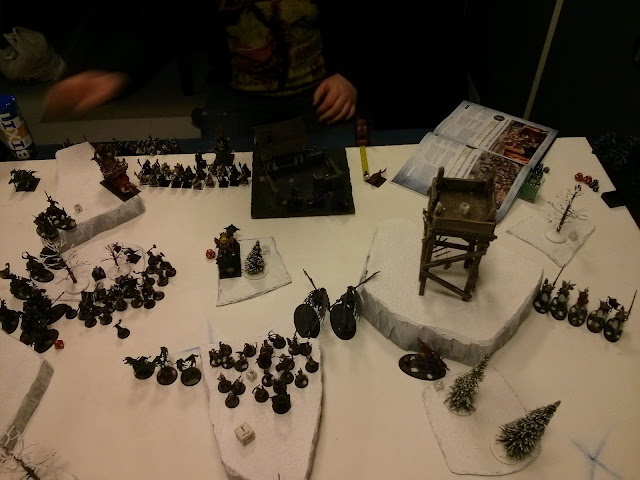 End of Turn 1:
Didn't have a lot of pictures, so some of this will be a little broken apart. Setting up in a line roughly where the spirit hosts to Lord Jotne (Mannfred) is, I deployed agressively. I had an objective, and not a world of time. Charging forward with Grave Guard and Black Knights on the left, they smashed into a full block of saurus warriors. The unit had occupied the entire forest, but were down to 8 models. The Blood Knights looped around the flank, and I refused to engage the bastiladon in the center. 2+ save ignoring rend, no thanks.

The Seraphon shone into battle, with a disciplined line of Guards defending the Sunblood and Slann in the center. The flanks were held by more warriors and some knights, which can barely be seen at the edges. Using the magics of magic, the Starmaster gave the Bastiladon a mystic shield and summoned kroxigors into the fight. 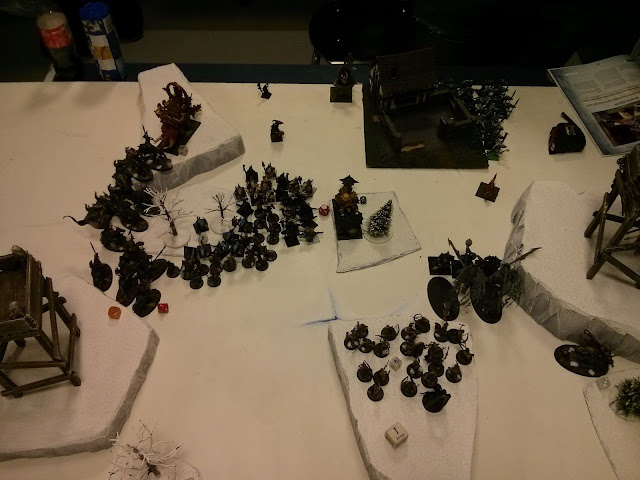 End of turn 2:
The Seraphon siezed the initiative and drove hard. Smashing their knights and stegadon into the Black Knights, they seemed to have the flank secure. The temple guard came running into the Grave Guard whilst the kroxigors threw themselves at the Morghasts. The center too looked good for the Seraphon. On their left flank, the warriors waited for their inevitable doom.

Lord Jotne's host replied by putting a lot of mortal wounds on the bastiladon. The Kroxigors lost a beast to no casualties on the Morghasts. The Grave Guard were nearly wiped out, but the black knights held firm. 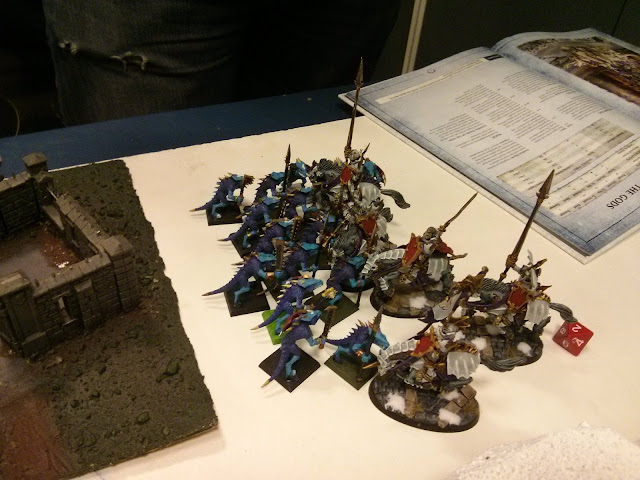 The grave-born steeds of the Knights of the Crowned Moon bore down upon the seraphon. The crazed eyes of steeds was matched only by the cold fury of their riders.Closing ranks, the warriors held their spears and their shields firm, trusting the celestial equipment and their own armoured hides. Crashing into the ranks like amailed fist into an plate-mail chest, the knights knocked over many warriors. A few were pierced by long spears or mauled by savage mounts, but the shield wall held firm. There would be no purchase for the vampires this day, for the might of the celestial realm was arrayed against them.

I had high hopes for the Blood Knights, but they failed me. Managing only 3 wounds across 25 attacks, they had no effect on their prey. What a dissapointment! My plans of sweeping the flank and driving Blood Knights into the side of my enemy was crushed, but there were other things to attend to. 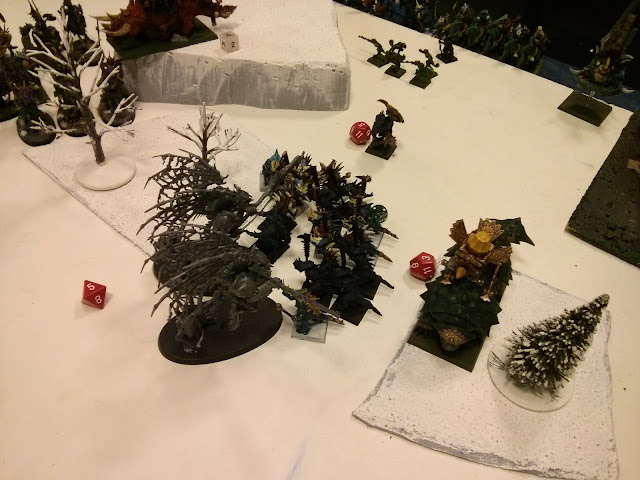 In the center, the Morghasts had finished off the Kroxigors at the same time as the temple guards killed of the grave guard. Having a choice between a beast  with a 2+ save that ignores rend and troops that can be slain, the Morghasts proudly bore down on the temple guard. They too fluffed their attacks. My two heavyhitters had charged and failed to make any impact. In return, the temple guard slew a Morghast. Things weren't looking good for my center troops. On the flank though, my Black Knights chewed threw the saurus knights, and kept on regenerating the Stegadons damage. Mostly due to appalling rolls from my opponent, but they were in there.


Turn 3, the undead sieze the initiative! 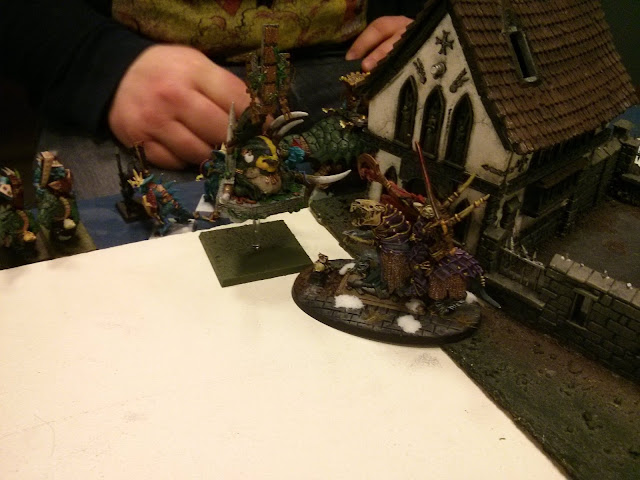 Lord Jotne howled. The heart of the enemy force was vulnerable. Though the reptillian warrior commanded the battle, he could see the energy binding them all came from the toad-like creautre. If he could slay that, this battle would be all but won. Charging out alone, he trusted his luck to blessed armour and a good swordhand.

Mannfred charges out! Sensing an opportunity to cut out the heart of the Seraphon reinforcements, I charge him alone into the back yard of the foe. I'd slay the Slann, ransack the house (which I positioned myself to be within 1" of), and go on my merry way. It nearly went to plan too. I dealt 6 wounds to the venerable Starmaster, and took none in return. I'd have to wait until next turn to try to ransack the house though. 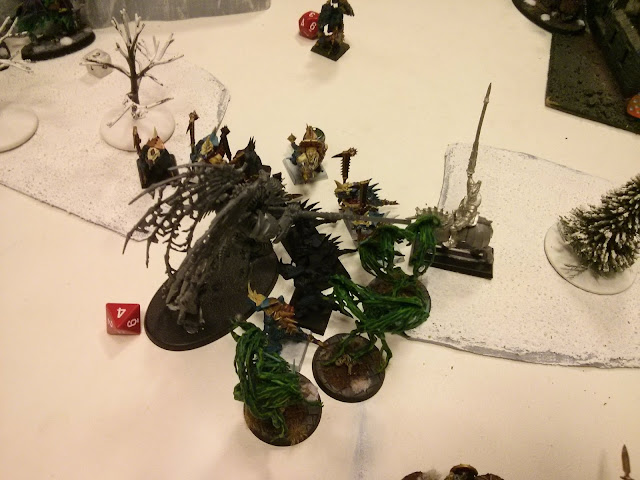 Lord Rein and the Spirit Hosts (how's that for a band name?) charged in to assist the Morghast.  The Bastiladon had been brought down by Arcane Bolts in the Hero phase. 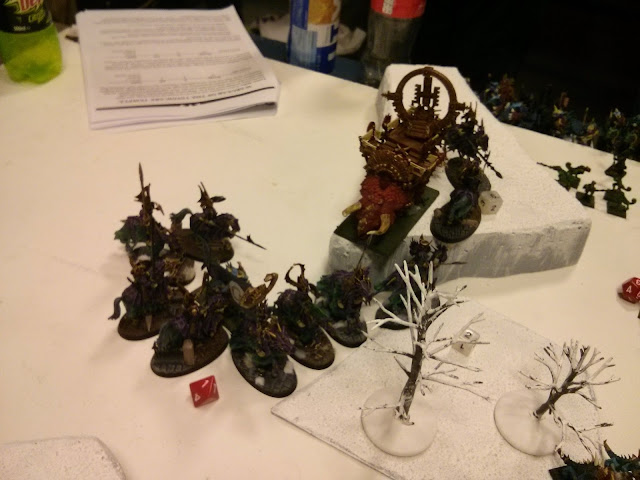 After 5 combat phases, my Black Knights were now back up to full strength. This frustrated my opponent to no end, but I thought it pretty hilarious. These guys can't kill anything, but they are surprisingly tanky. 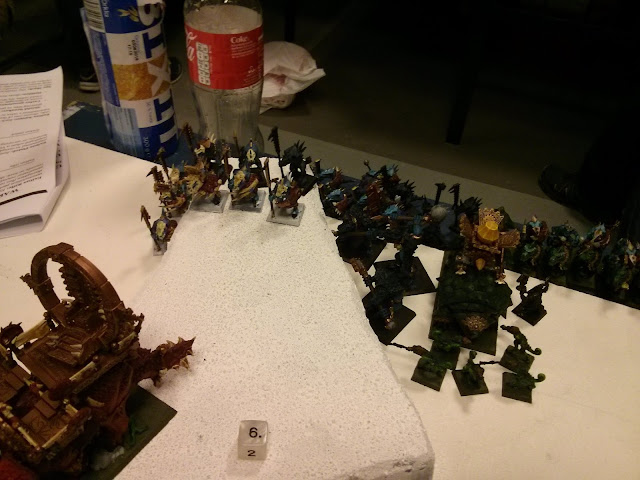 The Seraphon respond! Knowing his mortal peril, the Starmaster summons in another host. More Kroxigors, another Bastiladon and more Temple Guard. All my slaying so far had been for naught. Though they couldn't move this turn, it was only a matter of time before they would move to intercept. Especially the Kroxigors and Bastiladon were a true danger. 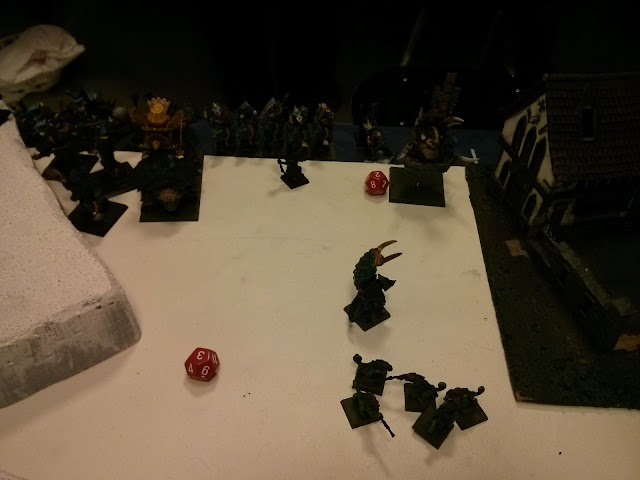 Not content with just summoning more models, my opponent blasts Lord Jortne to pieces. The Bastiladon opens fire and does a ton of wounds. The Starmaster is safe for now. 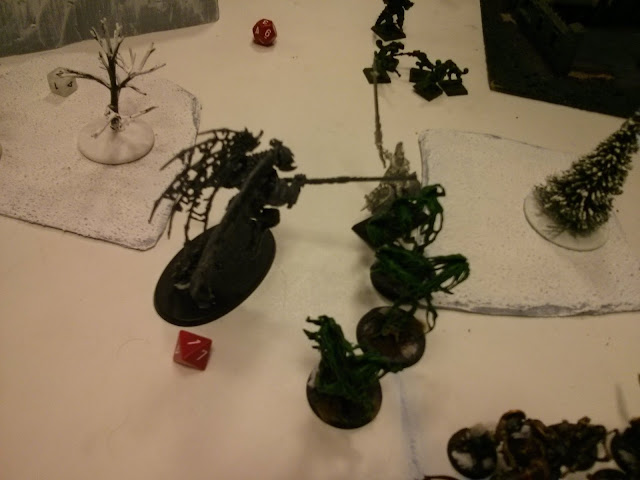 Together my dream team of undead wipe the temple guard. The center is now open, but I'm running out of time. 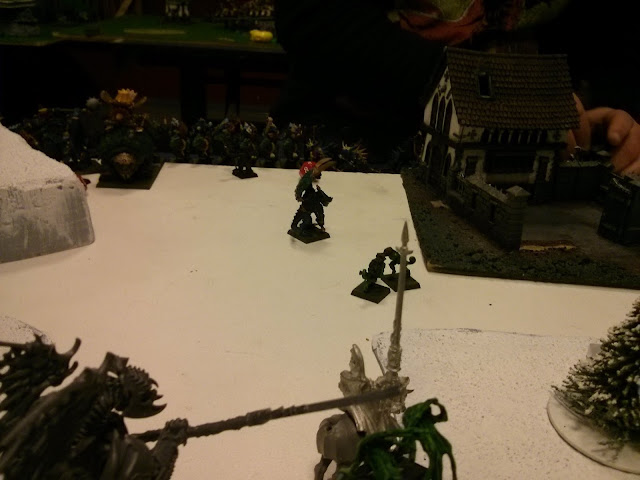 Turn 4. Undead go first. Rein, acting commander, slays the Slann Starmaster! With a crackling bolt of arcane energy, the ancient venerable one is mortally wounded, and flees the battlefield. 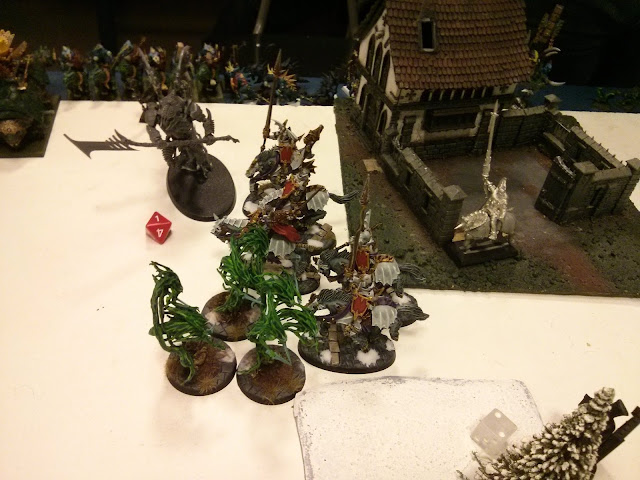 Operation Vampiric meatshield is launched. Three poor, innocent skinks are surrounded by 5 blood knights and three spirit hosts, and are slain many, many, many times over. 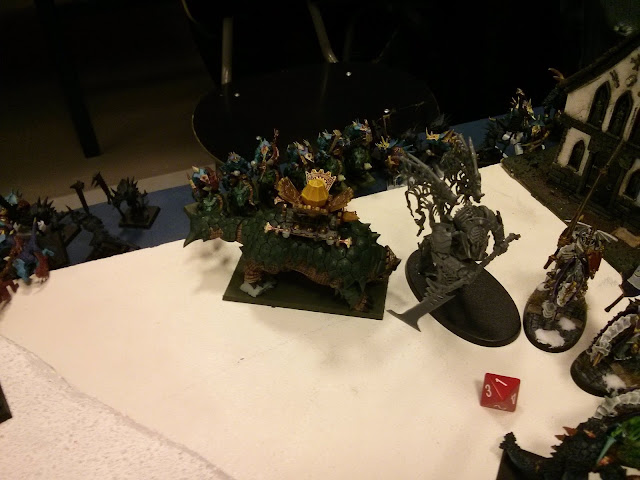 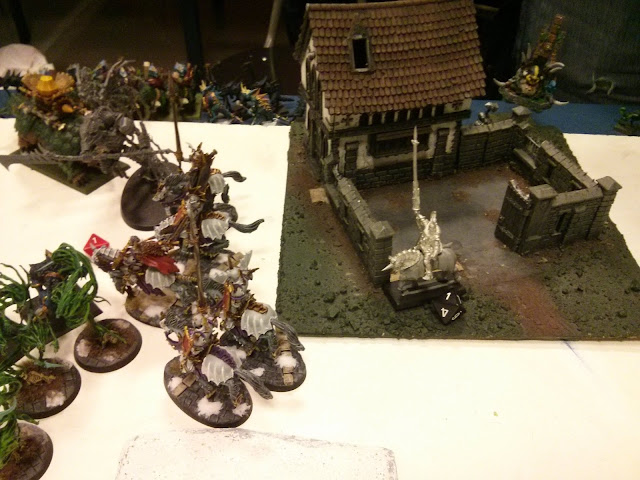 Far tenser was the shooting phase. At this point I realised that my Necromancer wouldn't reach the house in time. That left only Rein able to complete my objective. The Bastiladon takes aim at Rein, and blasts him. The mighty war engine does 4 wounds! Rein therefore lives, armour smoking and in rather bad shape. All now depends on the initiative roll and my skills at rolling a 6.


I won the initiative roll for the next turn. Meaning all I had to do now was to roll a 6, and I would win. Grabbing my favorite dice, I blew and I prayed and I rolled. The result was a 5! I didn't find the artifact! Defeat to the undead, and victory to the Seraphon. 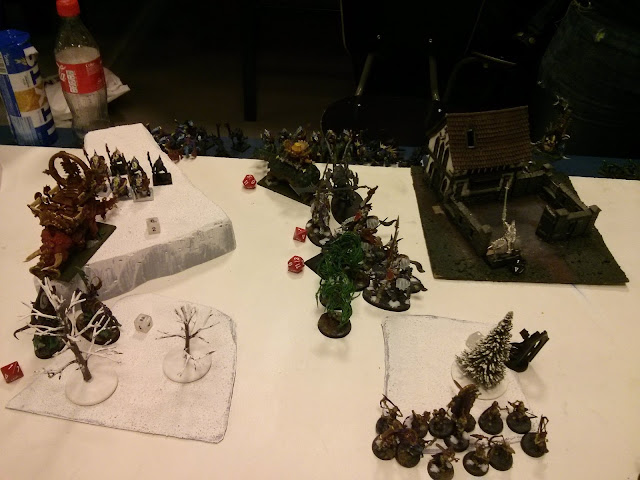 "Sound the retreat!", Rein called. Sensing defeat in his bones as much as on his smoking armour and charred flesh, he called again. "Pull back! We must return to Lord Karasjok!". He was heard, for discipline among the troops was high. He would be disgraced, no doubt. His lord could ill afford to throw away useful troops and valuable lieutenants, so he would live. What artifact they sought he did not know. Had his lord informed him, he may have found it. Only a few useless trinkets and a beaten up chalice. No objects eminated power, no weapons or staffs or artifacts that spoke to him. Now it was all he could do to retreat in good order, and spare the little troops that remained.


So I was defeated by a roll of 1. Dang. If there was anything I would change, I'd put the Blood Knights front and center to clear the way, running all of my characters straight at the goal. Maybe deploy more Spirit hosts rather than grave guard to act as a meat shield as well. And take some more pictures. Need some practice on that.

Hope you guys enjoyed this little update. If you have any feedback, please let me know!
Posted by Darth Alec at 08:57