The City of Silence - Month 1 Finished

So this is a painting blog, isn't it? Time to put some painted miniatures out there.

First up are the Morghast Archai. I really wasn't sure about these models when I was assembling them. So odd. Fit together brilliantly, but looked really weird during assembly. With every layer of paint however, they really came together. I think these guys are some of my favorites of the new Undead miniatures.

Mournical sat abreast of his nightmare. It's dark red eyes widened with fear as the dark heralds swooped down. Landing with a touch that belayed it's mass, the Morghast turned towards him. "Where is your Master", it commanded. "He is sought". The ground churned beneath the giant creature of bone and armour. Spirits dug themselves out of the earth beneath it, seemingly lifting the herald off the ground. It's voice still echoed in his head as Mournical replied. "The High Lord remains in the palace, in parlay with the king of old. State your purpose, o holy herald, for I was to admitt none". To refuse a Herald of the Accursed One is a certain doom, but these are not unthinking beasts or slaves without understanding. Diplomacy is not unknown to them, for the Accursed One spends not his prizes needlessly. "Admitt us. The Supreme Lord has commanded us. All are to step aside and obey, as is His will". The threat was implicit. Though they were few, Mournical doubted they could defeat them in combat. His oath to the High Lord demanded he obey and admitt them not, but the Heralds cannot be refused. "Enter then, Heralds. We shall escort you, so your purpose may be fulfilled." 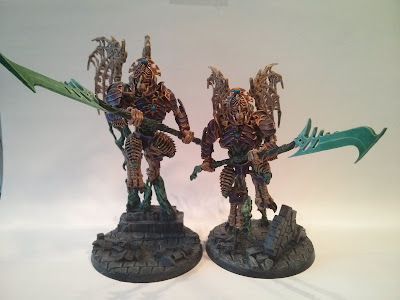 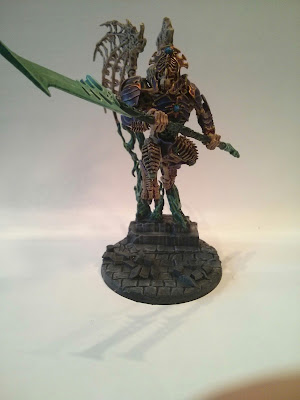 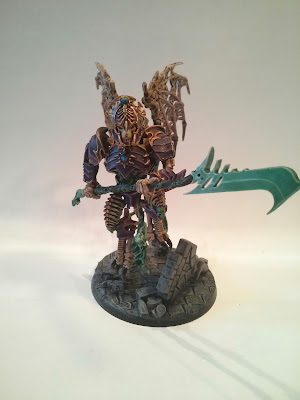 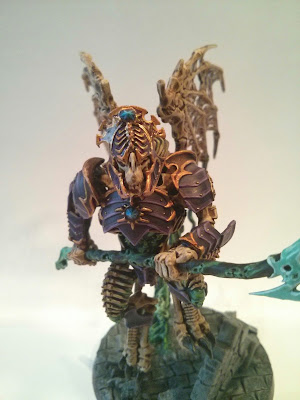 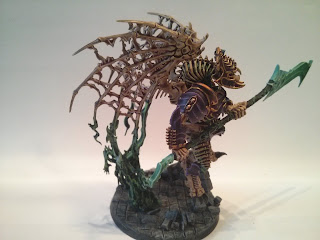 
Converted from the generic Empire Battle Wizard. Lovely kit. So versatile, and tons of bits! Tried to get more of the "High Priest" look, and less of the "creepy guy living in a basement" look.


The elder of High Lord Karashocks two remaining Necromancers, Nord was a wizened, bitter and pragmatic man. Bordering on two centuries old, he has seen more than his share of tragedy and loss. Despite this, the former Lord of the Graves speaks more bitterly than he acts. Though his words are often harsh, his actions show a surprising care when it can be afforded. When there is little room for kindness however, Nord has no qualms about abandoning pretenses to serve his purpose better. He believes firmly in the ascendancy of Nagash, and wears his remaining trappings of his order proudly. 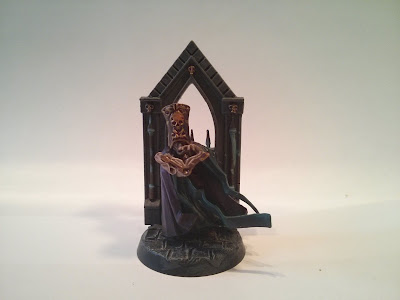 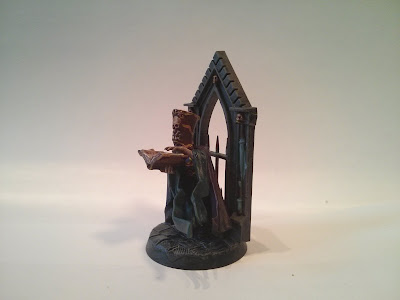 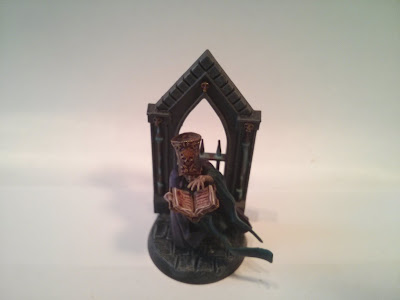 A classic model from the Tomb King range. I have quite a few of those in the City of Silence This guy was actually one of the first models I ever painted. It used to look terrible. Stripped, reposed and rebased, the Bone (Marble) Giant is ready to destroy something. It's also really good in-game.


Of all the reanimants in the City, the great statue of Seidi. Carved in dark marble and clad in ancient armour, the Giant stands across the eastern gate, first in the line of Reanimants along the Marbled Path. As the gate was betrayed, and the enemy let in, time was cut short. In desperate hours, Seidi would be unleashed to carve a swath through the heart of the enemy. Yet it is slow to wake, and requires great spells. With the eastern gate fallen without a fight, there was no time for the statue carvers to bring life back into the powerful monuments. Thus they stood silent for centuries, their purpose frustrated. Now, as the city stirrs once more, the earth shall tremble beneath its feet. All shall fear it's mighty assault, or be destroyed beneath it's massive blades! 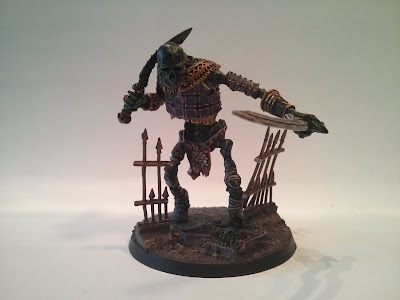 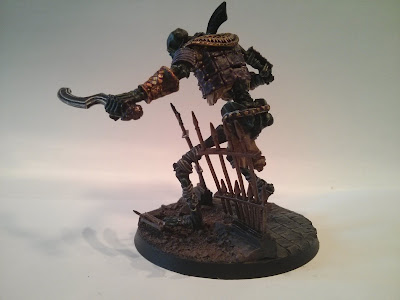 Green! I love the old-school green magical energy from the 6th ed undead books. It's much more "magic energy" than the blue-ish look that the GW scheme has. So I made my own. This is actually the second set of Spirit Hosts, so I reposed these guys to make them more varied. Might make a painting guide for the green eventually, as I've had a few questions about it already.

Not all who lived in the city of Stilluna fought to their last breaths. The weak, the young, the sick all died in their homes or in the streets, unable to defend themselves. Yet there were some amongst the people who could fight, could bear arms and defend others. Some who fell to the dark influences of Chaos and cowardice. These are the Unforgiven. They are bound to the city by force rather than will. As a reward for their terrible acts of betrayal, the scions of the dark gods bound them to this place as eternal torment. Their spirits would have to watch over the ruins they brought about, forever lamenting their fate. As the city once more heeds the call of war, these damned spirits are dragged along. They scream under the commands of their betters, but fight for a chance of redemption, and for the chance of eternal peace. 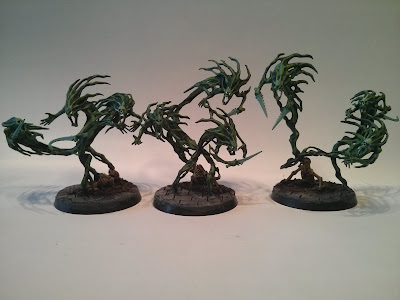 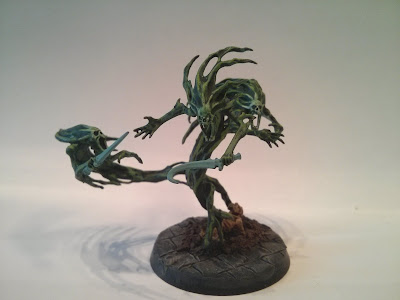 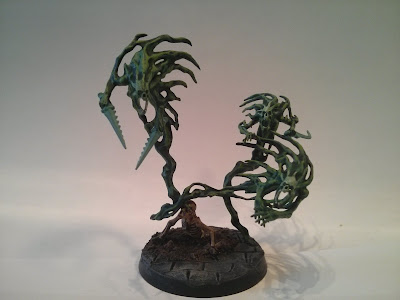 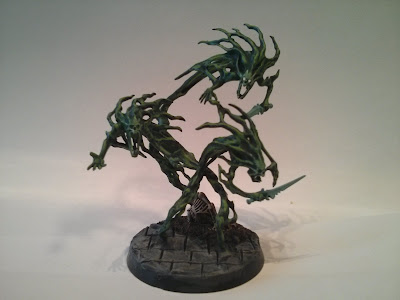 Now this is a solid kit. Really good reimaginings of the classic metals from back in the day. My only issue was how bad the great weapons looked. Monopose wielders and a boring weapon makes the unit really uninteresting. So I had to convert them all. Most of the weapons are Chaos Warrior stuff, but there's a solid mix here. Very pleased with the conversions overall.

They stood silent as the tomb. In each boney hand, an ancient, rusted weapon. The old gold and armour spoke of long years in waiting, guarding. Mournical had known some of these men once, when their flesh still clung to their bones and their mouths still drew breaths. Now they were naught but bones, and he didn't know which amongst them he had counted as a friend. Pale lights shone from within their eye sockets as they tracked the Blood Knights. Heads slowly followed them, though the Moonflame Guardians did not move. Do they even need a speech, Mournical thought. They've been dead nearly as long as I. Tradition demands respect though, and the guardians of the king must surely still expect that. "Wights!", a word strange to use about men he once longed to be. "We march forth once more. Long has your guardianship been. Long has been your restless slumber. Rejoice then, you souls of this proud city! For we march to war and vengeance against the dark gods, and all who have wronged you!". Short, he thought. But


"Be silent, Mournical. We remember your face. Show us what four hundred years of damnation has tought you in the art of war". 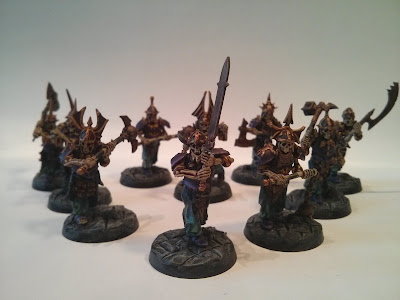 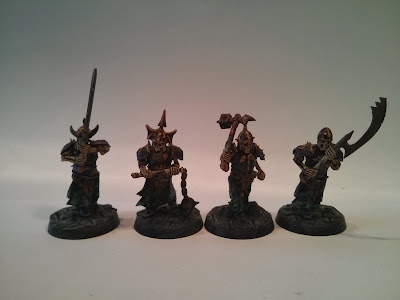 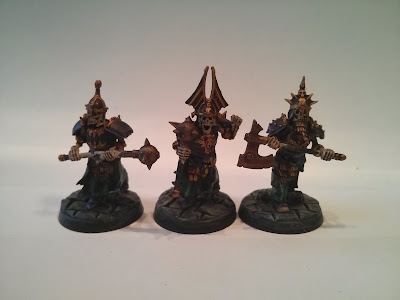 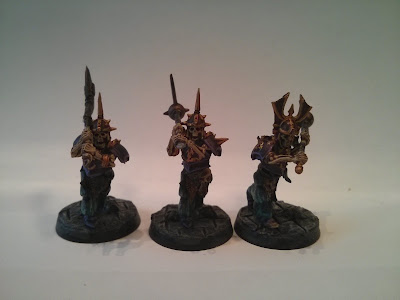 That's it for month 1. It's a bit of a mammoth update, but I hope you guys have enjoyed it. Truth be told, not all of the models are finished. But 95% there works for me, as I have a deadline to meet. I'll probably go over them again later to finish the last details.All of the bases will get snow as well, eventually. But I need all hands on deck to finish my army for SCGT2016.

We're supposed to paint at least £50 worth of models a month. I have a feeling I may have exceeded that.


Yup. A little bit over. But that's what happens when you're painting up a tourny army. My pace is usually a lot slower. And I believe I have some picture practice to do. sorry if these pictures are useless.

Until next time, Darth out!
Posted by Darth Alec at 11:18