When I started the City of Silence, I decided to go all in. Nagash, big boxed set and a ton of models. Picking up everything I had ever wanted to paint, it was a dream project. As part of that, I decided to enter the South Coast GT. In spite of travel distances and costs, I wanted to do something awesome. Something that could be remembered, and never regretted. I wanted to be there when AoS puts its best face forward. And so I've bought my tickets and booked my plane.

I don't have high ambitions for my results. I'm not super-competitive, nor do I have any intention of becoming that sort of player. My goal is really simple, end up in the top 66%, and get a "best sportsman" nomination. Don't think these are unreasonable. A decent list and some good playing should put me in a good position. Getting a nomination might be trickier. I'm not british, and if I get trounced my mood might sour a little. But if I bring my best mood and play for fun, there might be a chance here. Won't win anything, but a nomination would be really nice!

I've participated in WHFB tournaments before, and I'm not actually fond of the tournament mentality. Min-maxing, hard lists and WAAC attitudes soured me to the local 8th ed community. Not because I'm a terrible player, but because I'm not very competitive. Yet I'm in a tournament, and I'm likely to meet a lot of mean lists. So I had to build a list of my own, one that was fun to use, had awesome models, and could win me battles. I quickly decided to center my army around a Zombie Dragon, representing High Lord Karashock. I want to play with a dragon! Then I picked out a few models I had already painted, and added a few that would provide much-needed utility. Unto the list! 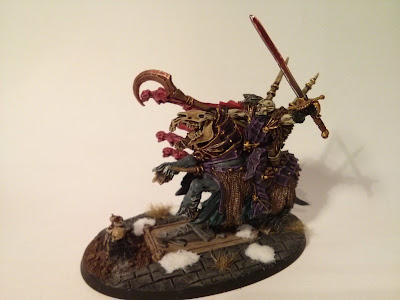 (Standing in for unpainted Dragons, it's Mr. Backstab himself!)﻿

(Bad picture, but I'm very pleased with my paintjob)﻿


This forms my core army. 81 pool choices. There's stuff I can move around (mostly the Giant), but plenty of hurt all over the place. I also have 38 pool choices to raise, or 19 to add to my army depending on need. To fill out the list, I have this: 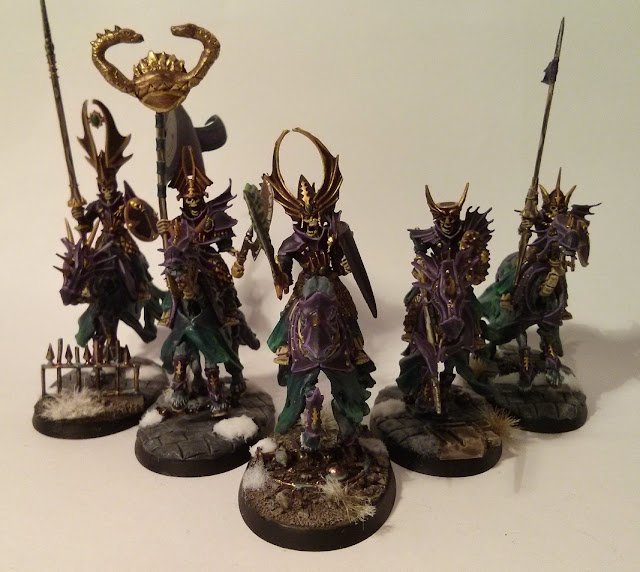 
Which comes out at 67 pool choices. Two things are important about this distinction. One, these guys can all be summoned, unlike the Blood Knights, Heroes and Ushabti. Two, these guys provide most of my utility and numbers. Without these choices, my army is hard hitting but incredibly vulnerable to tricks. Hopefully, I can use the numbers (archers, GG) and utility (Carrion, Spirit Hosts) to cover my weaknesses. I need to test this out, but I have hope. I'm thinking either the archers or GG are in every game, whilst carrion and Black Knights are more of a utility unit.
There's also the painting part. Need the time to paint everything, and that isn't easy when you are going for a high standard. So far I know I need to finish the Dragon, the Necromancer, and the Morghasts. I have no issue finishing them, but there's only so much more time for extra models!


If you guys have any opinions on what I should to or what I should bring, I'd love to hear from you.
Posted by Darth Alec at 21:10