First post in a while. For those of you who saw my first post, don't worry, I haven't abandoned the way of the Herdstone! I've got grand plans for my Beastmen, something hopefully unique and different and very "Age of Sigmar". More on which in a future update.

The reason for my recent radio silence is working on two armies to tight deadlines. As I've not got much in the way of Beastmen progress to share, I thought I'd make a couple of posts with my speed painted armies. After all, any hobby is good hobby, right?


A friend of mine got in touch to say one of his team had dropped out of the Firestorm Fours tournament held at Firestorm Games in Cardiff. Not wanting to let the fact that I didn't have an army and there were only a few weeks to go get in the way of a weekend of wargaming, I signed up.

I had a few armies in various shades of sprue grey, undercoat white or even unassembled, but I quickly worked out that there was only one real option. I had a Night Goblin army sat in my garage from a while back. The army consisted mostly of Skull Pass Night Goblins and a metric tonne of Squigs.

Seeing a brilliant opportunity, I checked out the Moonclan formation and started to build my army list. The event was running Clash Comp and I created a 20 pool list using the excellent www.scrollbuilder.com. Due to the limitations on time, I didn't bother with painting the full 30, so I prepared to paint up the following list:

The best things (well, one of the many awesome things!) about Night Goblins is how easy they are to paint. Using a quick and dirty scheme of block colours and a bucket of Army Painter dark tone. The Squigs were painted using Army Painter Dragon Red spray, a quick touch of Ushabti Bone and shaded in the same way as the Gobbos. I got to painting right away and with a mere fortnight remaining, the Moonclan was starting to take shape.

With one week to go, the army started to look almost complete. Luckily, I had the models I wanted so did my need to spend any extra money on this army (which was an eBay special anyway). Not only that, but units like Mangler Squigs and Fanatics have a low amount of models for their pool cost, so I was happy to have less models to paint due to investing in some heavy hitters.

I was painting right up to the day of the tournament. In fact, I was painting Agrellan Earth onto my second Mangler Squig's base at 8.30am on the day of the tournament. All in all, I enjoyed the furtive painting journey with this army, and I've never had a complete Fantasy army before so this was an enjoyable first. The army was never going to win any painting awards, but it was complete. 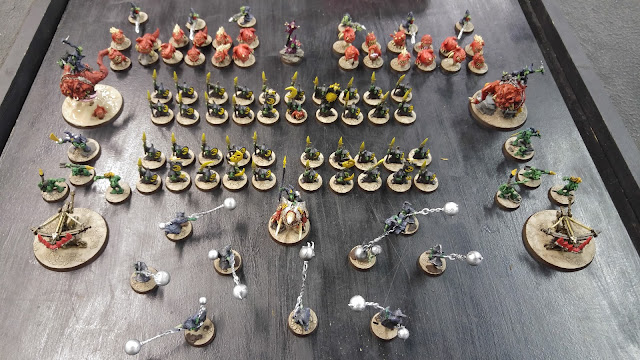 Here's the Moonclan in all its glory. It didn't perform particularly well, as I lost every game. I put that down to lack of experience of the game, rather than the list being poor. I wouldn't want to blame the Gobbos when it was me that led them to defeat! 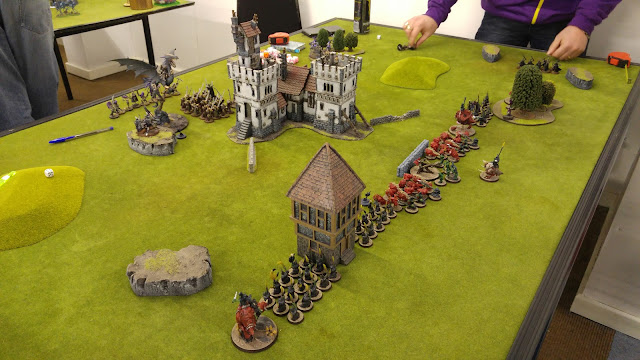 Stay tuned for an update on another army speedy project soon, as well as more information on my Beastmen for the tale itself.