An Army was dead to begin with. There is no doubt whatever about that. The register of the burial was encoded by the website, the company, the studio, the chief mourner. Games Workshop signed it. Settra's name was upon 'change for anything he chose to put his hand to. The Old Army was dead as a door nail.

The Tomb Kings went the way of all things in the time between my last post, the sands of time that have drifted since I last blogged have taken with them the rulers of the Sands. I had been brooding on some models from the range, that would have harked back to models the child I once was first held in his chubby digits. Mummy's, Arkhan the Black, Nagash, Skeleton Chariots. I had looked at a Necrosphinx and a tomb King using a very old GW model, but then the Tomb King range ceased to be supported. I still have the warscrolls, so I could play with any models I have but I worry a new opponent may not and be in the dark, against Death! So I was eyeing up a Necrosphinx however "events dear boy....events".

It was from this Last chance to Buy that I took an inspiration. 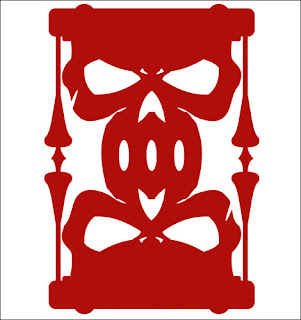 It's a really cool device, it has skulls and time themes, it exudes Death, and I am playing a death faction. I decided I would use a modified version of this logo as my Army motif.

The second inspiration came from America.

The United States host a sort of entertainment TV spectacle in February, that has occasional sporting interruptions, making it a multi-format, multi-genre Juggernaught. It is known as the Super Bowl and seems to be very popular in that country. It's like Britains Got Talent I think but Simon Cowell isn't on it and I don't think the winner is decided by a phone vote, but I might be wrong about that.

Anyway, my parents live in North Carolina, USA, so I have a cultural link to the New World. This year there was much excitement as the Carolina Panthers made it to the final, the Super Bowl itself. My family's favourite player is Luke Kuechly, but what do we know? I'm starting to understand the sport but I don't think it'll ever make my top 5. With Panther's suffusing everything I decided I would use the team colours for my Army. Black, Blue and a little white.

So I had a scheme and device, and I will remind you what models I had purchased. Black Knights, Isabella Von Carstein, and two RealmGates.


I began with the biggest and did the two RealmGates. One as grey stone with gold inlay, the other sandstone with obsidian sculpture. I have a Nurgle opponent and have previously had many battles in the Realm of Life so did one mist as Green to depict this. My Brother is collecting a Tzeentch Army, any Sigmarines I play are from the Realm of Azyr, and I myself have blue as a key colour, therefore the other mist was Blue. To make the black stand out more I also made the skull eyes glow blue to draw the eye. I felt they were a bit boring until that marked them out. 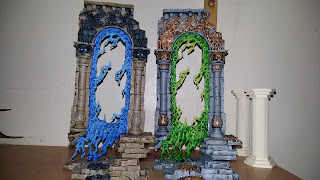 They were very easy to put together and quite easy to paint. I really like these prices and can't wait to put them on the field of battle. But who's coming through the Gate? 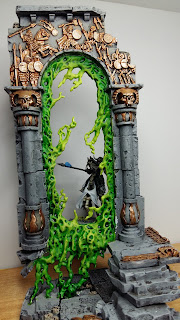 The Black Knights have by accident become mostly White. It adds to their spectral nature I find. The shields are the only place I have been able to put the logo so far. I have used Dark Elf kite shields as they have a certain Bat like Shape to them but I nice flat surface to freehand design on. The Black Knights horses are great to stick together, the Knights themselves are a struggle. The heads and Arms have spent more time on the carpet than on the painting table. 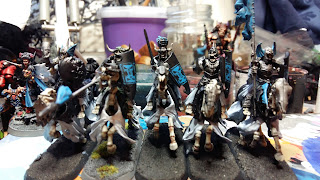 A Hero to lead these Immortal Warriors, the Hourglass figure of the Isabella Von Carstien model, which I will be using as a plain Vampire Lord (Lady). I picked it purely because I thought it was a beautiful model, I built her base up using cork and two pieces of slate and found a little rose sculpture to decorate the rocky ground and mirror the flowers all over her dress and hair. I wanted to do a good job on this model so took some time blending the blue of the dress fuels and the tiny brush strokes of the armour, hair and petals. I even tried to do ripples in the blood in her goblet. Tried at least. It's her eyes that I want to hypnotises opponents, evil, cold and predatory. 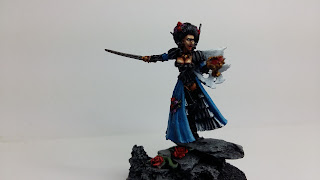 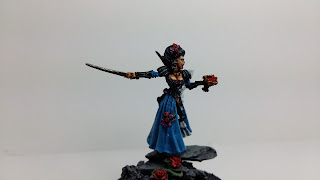 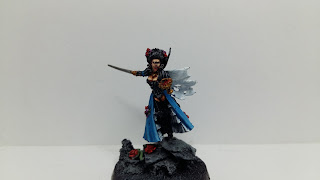 And so a month of work was completed.

However there is more to come! I have fought a battle against a member of this very site, Sam and his Tzeentch force (there is a supremely elegant and wonderous Tzeentch Sorceror Lord conversion to be revealed there). I plan to Battle Report this encounter right here, very shortly, then there's the purchases I have made for March which I will log in another blog post later.
Death Becomes You!
**** EDIT ADDITION **** Those brighter pictures of the Vamp. As requested. 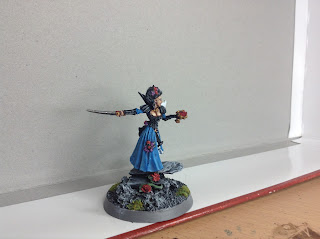 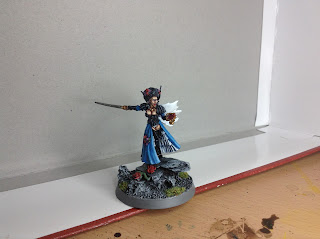