Ok! Month 3 and I've finally got some stuff painted.. not a lot.. but some!

So my first fully painted unit is the Everchosen Chaos Warriors. It's been quite difficult to make them 'pop' with such a dark palette but I'm happy with the result. Now they're finished I'm wondering if I need five more.. damn it. They do die quite quickly. 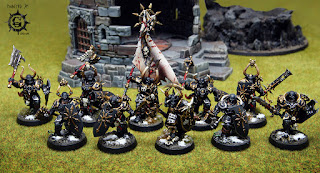 Also got my Slaughterpriest finished. Such a great model this and he's great on the table too. So much so I've already bought the alternative sculpt too. Two is better than one after all.. 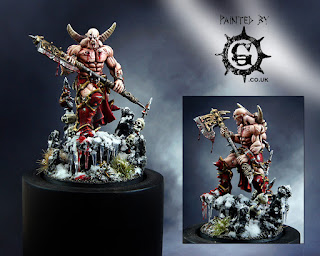 I really but some effort into the Slaughter Priest as he's going to be an entry to Golden Demon this year.. hence going a bit overboard on his base!

The basing is how I'm going to do all my characters and monsters.. so I'm having to make sure I leave plenty of spaces for icicles.

So that's all I've got painted but it's a start.

Realised I needed some shooting in my army so I bought a Skull Cannon.. it misses almost every time.. so I bought another one.. still no luck.. but they look cool! 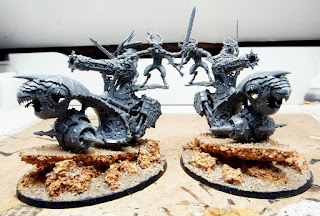 Looking forward to getting some paint on them, maybe that'll improve their luck! I will let you know next time.Oh! Almost forgot! Finally got started on Archaon himself! Well his mount anyway. Took some time to get 2 of the 3 heads done. 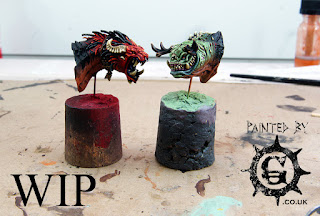 Just the Tzeentch one to do.. and then the rest of the massive thing.