So another month has already passed, hell we're already halfway through this month! It seems hobby time is at a premium at the moment, the birth of my son has definitely been a deciding factor in how much painting I have managed over the past few weeks. But I'm not going to complain about something so awesome, even if he does come with copious amounts of vomit and crying.

Painting wise I've managed to finish up 12 Liberators, a Lord-Celestant on Dracoth , a Lord-Relictor and a single Retributor. On my painting table there's currently another four Retributors, four Prosecutors and another Lord-Relictor basecoated silver. The painting scheme I've got isn't too bad for pumping out in volume, it's just finding the time to get that painting line going. 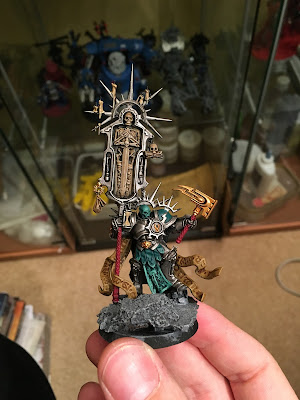 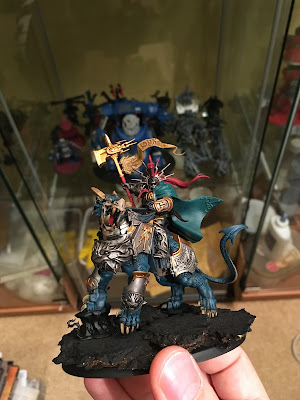 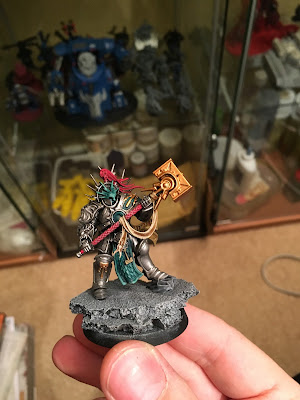 I think though the next couple of months I'm definitely going to be making up the lost time in building and painting. I've signed up for not one but two Age of Sigmar tournaments in June, one on the 3rd and 4th for Bristol Smash the other a one-day event in Leeds on the 26th June. Comitting to both of these means I'll definitely need a fully painted army in time for those events, so the countdown is on!

As an idea of what I've got a head of me, it consists of the Stormcast Eternals Expansion Box Set, the new Stardrake Dragon, the Celestant-Prime and the Knight-Venator, Knight-Vexillor and Knight-Heraldor special characters. I've probably bitten off more than I can chew but I work better under pressure when it comes to painting. A couple of years ago I built and painted a whole 1,000 point Japanese Infantry Bolt Action army in a fortnight, I hated it but I'm sure with about 8 weeks to complete it all I'll be fine....

I'm looking forward to both tournaments, I've never played a Age of Sigmar tournament yet and with the South Coast GT last weekend it's definitely made me want to get involved in the tournament circuit. The coverage from Dan Heelan, Wayne Kemp, Russ Veal and the slew of other helpers over the weekend was phenomenal, I was gutted I couldn't make it but the continuous supply of YouTube videos, live streams and Tweets over the weekend really was a huge thing in keeping me entertained.

Not only that but we also saw Games Workshop come and support the event, something unheard of in the last few years, they ran coverage on their new Facebook pages, ran a community voting competition for best army and continued to provide updates throughout the event. Without a doubt I think I'll definitely be making the trip down next year, Newcastle to Portsmouth is a pretty big trip but by the looks of things it will definitely be worth it.

So yeah, I'm going to be breaking my own rules for the Tales of Sigmar over the next couple of months to get my Stormcast done. I think once they're completed I'll revist my Night Goblins and properly get them done month by month, who knows it might be in time of the recently 'leaked' new Orruks. If I've got some extra time over the next few months, yeah right, I'll also do some extra articles, either battle reports, book reviews, unit reviews etc. I want Tales of Sigmar to be more than just hobby progress so hopefully I can help towards that.

Chalmers
Posted by Chalmers at 15:42