What a difference a weekend at home makes. I've been on a bit of a hooby binge this weekend in regards to my Stormcast. As mentioned last week I've got two tournaments booked in for June and I'm yet to have a painted army ready for it. All the Stormcast have been purchased and this weekend I've powered through all the characters with just the expansion set left to tackle. 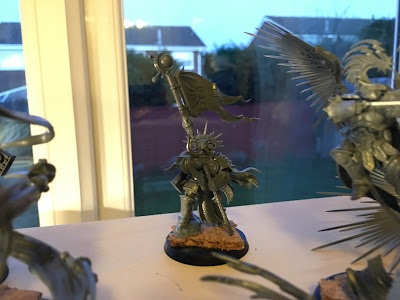 First up were the easy guys, the Knight-Vexillor standard bearer and the Knight-Heraldor. There was only really one option that I was going to give my Vexillor and that was the Banner of the Storm which allows you to teleport a unit anywhere on the battle within 3" of an enemy. Not only that but every enemy unit within 6" suffers D3 Mortal Wounds on a roll of a 4+, this is great to pick up that real punchy unit throw them in the ranks of the enemy, deal out a load of mortal wounds and then get into combat. The Heraldor, on the other hand, is almost an auto-include in every Stormcast list, while the option for a Stormcast unit to be able to charge even if it ran is nice I think the Thunderblast (Toot-Toot - Facehammer reference) attack is what you take the Heraldor for. Pick a terrain piece within 15", roll a dice and every enemy unit within that many inches of the terrain piece suffers D3 Mortal Wounds. This is going to be great for units that like to bunch up on terrain for cover saves, whether it's targetting camping units on the back of the board such as war-machines and the like. Or waiting for the enemy to move up the board and then targetting them when they've bunched up, you've got some great scope to use this ability. 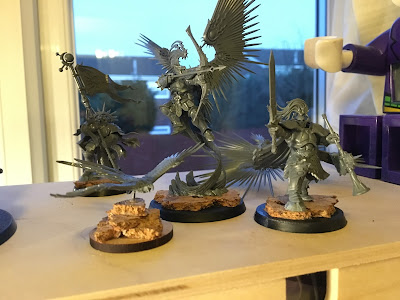 After this I moved onto the Knight-Venator, I love this model he really stands out above the Judicators and gives off that aura of being the top marksman of the Stormcast. The ranged threat will mean I don't have to commit him up the board despite being quite quick. He also has a one time use super-shot which does either D3+3 damage or when targetting Heros and Monsters does D6+3 damage. This will be a great snipe ability to take out that all important model that gives off bonuses to the other units or just a straight out scary monster. Like all my Prosecutors I've magnetised the wings for ease of transporting, the bird though was a complete pain in the arse, I couldn't for the life of me see where it's meant to connect to the Venator. I struggled so much with it, I actually ended up just putting it on a separate base to accompany the Venator. It won't cause any problems in games, I expect half the time I'll forget to even delpoy it next to the Venator. 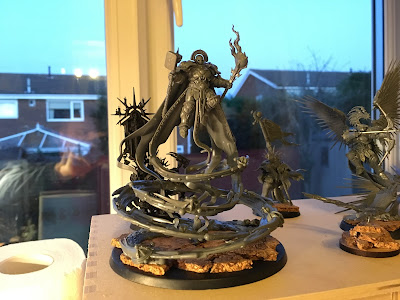 Once the three 'easier' models were assembled I moved onto the main man himself the Celestant-Prime. I'll say this now, the model is absolutely beautiful, but the design team at GW really need to have a word when they're designing models. Just because you can do something doesn't mean you have to do it. The swirls for the Prime were relatively easy to fit together, it was a case of waiting for one piece to dry before trying to attach the next piece, it wasn't until the very last couple of pieces where the two different levels are meant to connect together that I had some problems, but after some perseverance and some mild-mannered swearing I finally got it connected. The wings though are the problem, like every other Stormcast winged unit they so spindly and extravagant they're an accident waiting to happen. So much so I ended up snapping one of the tips as I was trying to glue it together. I appreciate the quality of these models but surely someone at GW could see that these wings are not designed for constant use. I've managed to magnetise these wings as well to try and limit the damage but I'm not hopeful in the Prime still looking like new in a year's time after constant use. 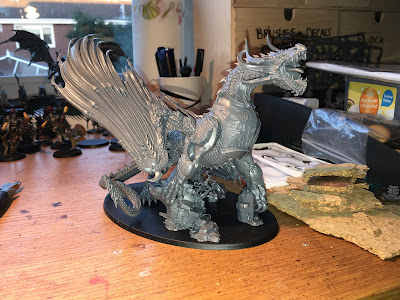 So four models down and it was only Saturday afternoon, I was on a roll....so bring on the Stardrake! It wasn't until I was halfway through this build I actually realised how big this model was. I should've realised the task at hand when I took the large base out of the box but undettered I carried on. The Stardrake itself was actually pretty easy to build, the wings proved a little bit troublesome but after some gentle persuasion I managed to get them to stick. Now I'm not sure whether it was just me but the Lord-Celestant on top proved to be the most trickiest to do. He seemed to be going together completely fine but then it came to putting him onto the saddle, this is where things fell apart, he just didn't want to fit. It seemed like his cloak was block him fitting on, then his legs were refusing to go either side of the saddle. I ended up finding the traditional brute force approach worked and got him where he needed to be. Again it was probably myself that was to blame but I've got to admit it's an absolutely amazing kit and a bit daunting to get painted up. Hopefully I can do it justice! 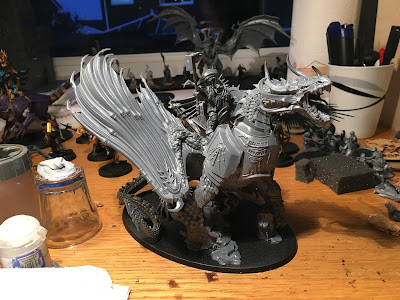 Along with the building I've almost finished painting my Prosecutors and Retributors, I'm hoping they're finished and based tonight so I can get some pictures up. But for now I've got the Stormcast Expansion box set and it's 20 models to build and then it's all aboard the priming train. Six weeks to Bristol Smash...Operation Stormcast Eternals is in full swing.

Chalmers
Posted by Chalmers at 16:01