The Invasion stumbles on...

The Realm of Life can probably rest easy given the length of time it's taking me to put this lot together, but I think I'm getting there - mainly thanks to an upcoming tournament!  The tournament has caused me to rally a wider selection of Nurgle units, so that's the key problem at the moment.  Still, Nurgle's easy to paint.  Isn't it...?

So in addition to the Daemon Start Collecting box I began with, I've added the Glotkin and a Maggoth Lord to the workbench.  I've also purchases a second Start Collecting box, though the Herald and Nurglings from this one were for a wee conversion job - my own take on Epidemius.  I'm not a fan of the GW model (£30 for something that looks like it melted before being molded), so I thought I'd take a crack at my own version.  Also, I'm running a list with two Plague Catapults to rack up lots of wounds early doors - so I think it's only polite to make Epidemius look as cool as possible, and to make him fairly easy to spot and shoot at!

The palanquin is scratch built from balsa and sprues, with the "bum flag" from the Glotkin model as a banner.  The thing in his hand will be an abacus (I've since greenstuffed it, and it does look more like one than I feared it might).  On the whole I quite like the size and sense of balance on it, so hopefully it'll look okay painted. 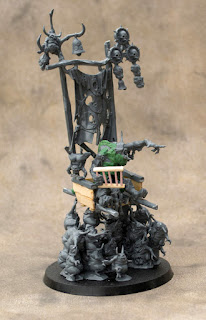 The Maggoth Lord was already constructed, so I just had to paint him up.   The upper body of the rider is magnetised so I can run it as any of the three Lords, but after a few games I think Bloab brings the most to my army - he can cast two spells, and his shooting attack is quite good as well.  You can see the Realm of Life basing I've gone for - the plants are aquarium plants that I've melted holes in and ink washed to look diseased. 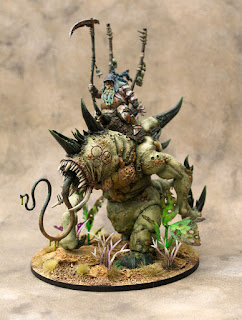 And here are all the finished Plague Bearers and the Herald.  I'm going to try and add another ten Bearers for the tourney, but that seems unlikely at the moment - the Glotkin is built but I've only just started painting him/it/them, and I think it's going to take a while. 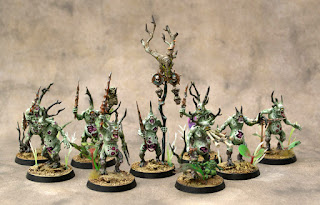 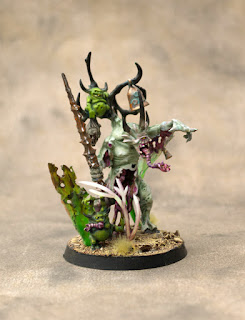 I enjoyed doing the bases for these, but it is another time consuming stage, so I may have made a bit of rod for my back.  Also now, with the Grand Alliances, it does kind of mean I should base all my Chaos units like this, and I'm not sure it suits every army.   I might stick to the same basic colour and textures, and change the foliage/debris to suit the different marks of chaos.

I also have three Drones that are nearly done, so I should be able to post those soon.  Other than that I have some re-basing to do on my Blight Kings, and my second Plagueclaw to paint up.  And just a little over three weeks to the tourney... oh dear, I've got some work to do.
Posted by Axis Mundi at 22:11