Bringing the City of Silence to SCGT

The SCGT update is here!
Part one, anyways.

It's been a little long in the making, but here it is. As some of you might know, I went to SCGT. Traveled from Norway to the not-so-distant shores of England for my first international tournament. Ended up in a above-expected place of 48th out of 130. Won three games, lost two and drew the final battle. It was a great weekend. The organizers did an amazing job running such a large event so smoothly.

I also met a lot of great people. Six good games were had, including a dream match against Steve Foote's amazing Tomb King army. I'll get to that soon. For now, pictures of the army as I brought it to SCGT. Most of this stuff has been painted between january and the tournament. The only exceptions are the Blood Knights, half the Spirit Hosts, half the Black Knights and Isabella. So a lot of work in  a short time, now that I think about it! 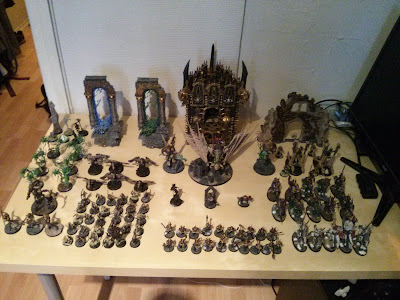 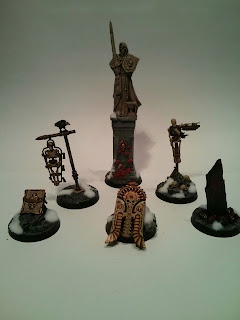 Objective markers! Made from a variety of kits including Nagash, the Giant and Garden of Morr, they are all themed. The chaos obelisk may seem out of place, but it's one of those terrible growths that pop up whenever chaos has been around. It's sought to be destroyed rather than captured. Every objective could tell a story like that. 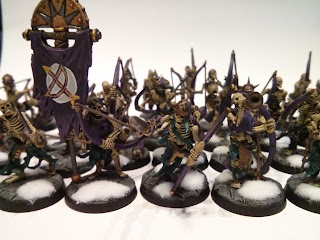 Then we come to the bulk of the army, my archers. They are terrible shots. However, regenerating wounds and shooting twice makes them a serious threat, and my only real ranged damage dealer. They scared quite a few opponents, and sniped their share of the enemy heroes! 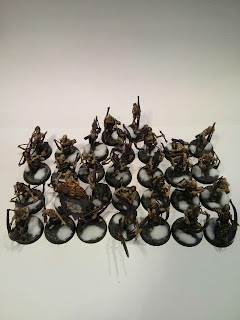 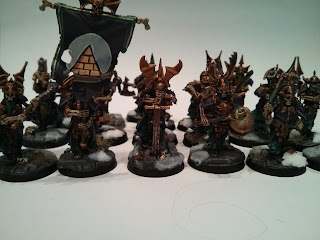 The unarmoured might of the army. 20 Grave Guards with great weapons. They deal tons of damage! Too bad they are so slow and vulnerable that they aren't worth it. They spent most of the weekend in my summoning pool, waiting for action. 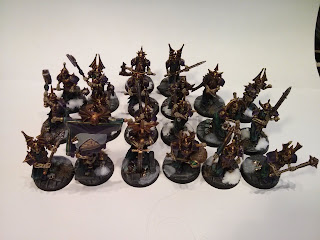 As with the skeletons, all converted. Mostly a light repose, and added new weapons. Never liked the original great weapons, so I added a variety of them! Lots of Chaos Warrior weapons here, but some various bits and bobs throughout. Really enjoyed how much personality I could get out of some fairly static models. 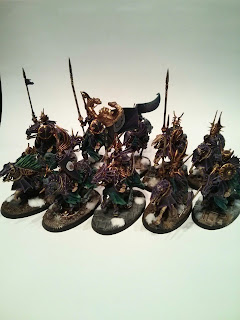 Black Knights! Tanks extraordaire, killers impotent. They do no damage unless they are at buffed at least twice. They can however tank enormous amounts of damage. D3 models back is 2-6 wounds returned every single turn! 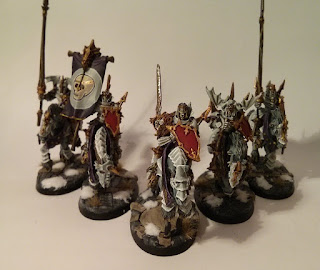 The real heavy hitters, my Blood Knights.Went with a new colour scheme. The Blood Keep is no more! Unfortunately, my freehand is terrible. Red also represents vampires, so you'll only see that on Soulblight models. 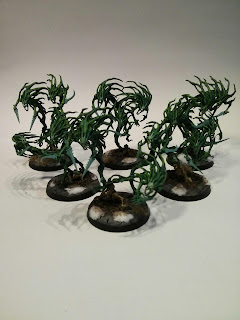 Spirit Hosts! Possibel MVP's. They never failed me and never underperformed. I'm seriously considering adding even more! Ethereal is a great rule. And every hit of a 6 being Mortal means you are only a decent dice roll away from shredding your foe. 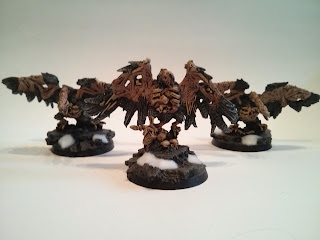 Carrion. Speed painted. Huge dissapointment. Not enough combat threat to capture objectives. I also played them wrong in most scenarios, so they failed to do what they should have. 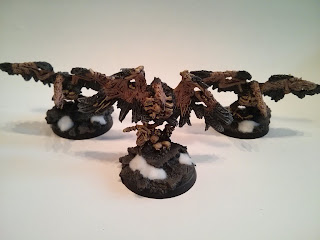 I did manage to paint up six of them though! So now I have a lot. 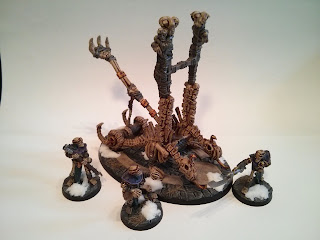 Screaming Skull Catapult. Metal. Unassembled. What a nightmare. Too bad they didn't do much for me either. Still, cool models. 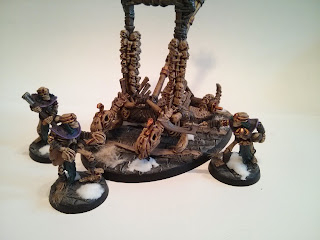 Oh, and I built two! Two + Necrotect = undead Gunline. It's not great, but it shoots and it scares. 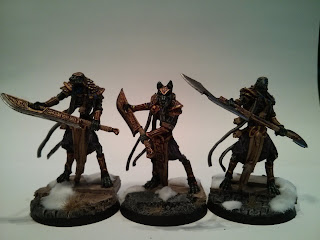 Ushabti! Big and fighty and super not-tanky! I love these models. So great. They also do very well in combat with lots of attacks with Rend and D3 damage. Beware of models with more than damage 1 though, they will tear the Ushabti apart. 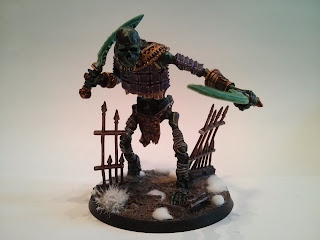 Another contender for MVP. The Bone Giant did great things the whole weekend. Rend 2 and Damage 3 is brutal! And a 33% chance to attack twice in a phase? Awesome. Just wish the model was bigger. It was huge back in the day, but now it's so small! 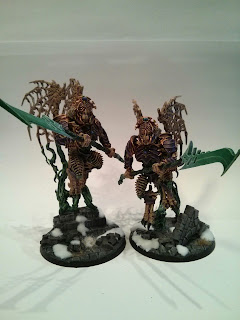 The Morghasts did me a solid. Rend 2 and Damage 3 like the Bone Giant, but with more move, and a summoning buff. Great stuff. Want many, many more of these. 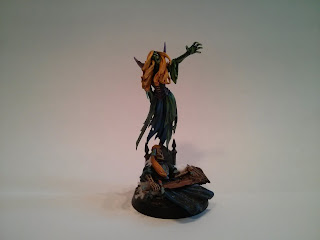 The howl of the banshee came mostly from under use. She's not expensive, pools wise, but I still struggled to fit her in. Lots of unused potential here. 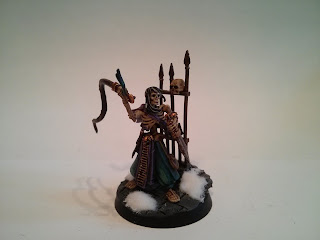 Converted Necrotect. As I mentioned, he buffs Screaming Skull Catapults by quite a bit. He also buffs the Ushabti and Bone Giants. Tempted to use him more, but he only really showed up for the catapults. 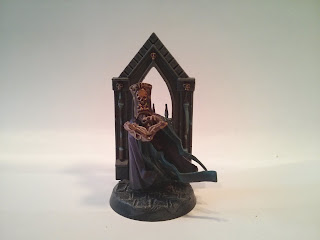 The Necromancer survived all six battles! Hanging back and casting spells is a pretty safe occupation, apparently. Never got much use out of hisVanhel's Dance Macabre, but the ability to shift wounds onto nearby units saved him in game 1. 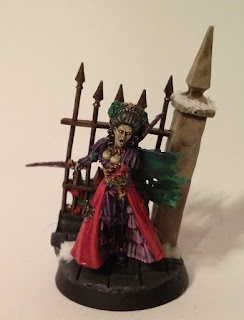 Vampire Lord. Wanted to bring Vlad and Isabella, but sadly I could not. She did reasonable, but died in a few too many combats. Entered the model into the painting competition! Didn't go anywhere, but 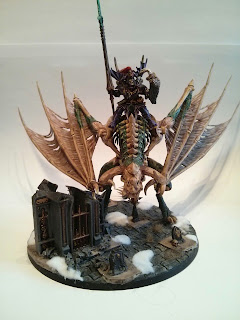 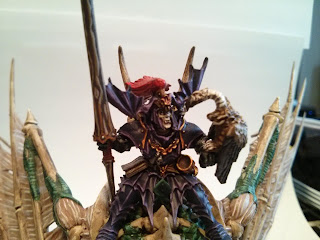