Of little people and big pots

With all the excitement about the new Destruction book and the launch of the Ironjawz, I was also tempted to cave in to my orruky side. But alas, both the Church of Sigmar's Retribution and the Grudgebreakers still needed some Hire Swords to use in Mordheim games, namely a Halfling Scout (for both) and an Ogre Bodyguard (for the Church).
I went on eBay looking for Halfling models as I was thinking of including a whole unit of them and pay homage to Lumpin Croop's Fighting Cocks, but the prices for ten of them were way more than I could afford.

Instead I found a Halfling Hot Pot Catapult and a single Fighting Cock for a reasonable price. With the addition of a box of Ogors I was done for the month and, as I had £10 saved from the previous months, stayed within the budget.

I've kept the Ogors for later in the month and moved onto the Halflings.

Steve 'Seagull' and his Kitchen Crew are among the few survivors of the Little People, a diminutive race renown in Ghyran for their love for food, easy life and the care they gave to Alarielle's gifts. As Nurgle's afflictions had little purchase over the Little People, they were merciless slaughtered by the servants of Chaos. Steve and a few more were rescued by the Grudgebreakers, and it has been the pirate duardin that nicknamed Steve 'Seagull' for his uncanny ability to shot and stew seagulls while he served as ship cook for them. Ever since their arrival in Venithya, Steve and his Kitchen Crew have been in high demand among the city's mercenary companies both for their skills in the kitchen and for the havoc their hot pots can bring amongst the enemy.

I wanted Steve 'Seagull', the Halfling Scout, to blend in with the Hot Pot Catapult, so that I can use him as a Gunmaster in AoS, so I clipped his fur hat and sculpted a chef hat.

The Hot Pot didn't need any conversion so I went straight into painting the lot of them. 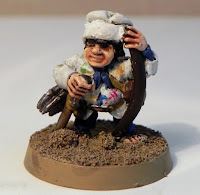 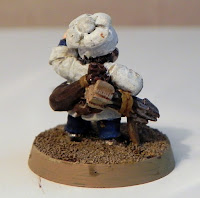 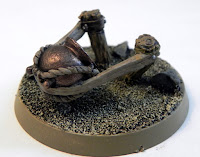 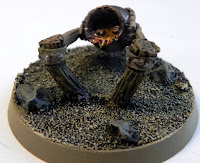 Posted by Godfather Viktor at 20:00