This week I have completed the Church of Sigmar's Retribution with the addition of a Meneater/Ogre Bodyguard. I was reasoning that, if an Ogor will join the Devoted of Sigmar he was more likely to imitate the Flagellants. Just like Ogors, Flagellants like to smash things, no? Then, while poring over the Ogor and Flagellants sprues to decide which bits to use, another idea struck me. Ogor like to keep Grots as pets, so what if the Ogor had adopted the human midget that hires him? The fluff for the two of them almost wrote itself alone...

Although a weak voiced midget, Johan Zwerg is the most successful, self-appointed prophet of Sigmar in Venithya. People gather in their hundreds to try and catch a few words of his fiery sermons. Many suggest this is because Johan's lectern rests on the gut plate of the notorious Meneater Barag Sineater. Since working for Johan, Barag has enthusiastically embraced the Sigmarite cult, particularly the Flagellants' belief that sin can be eradicated by vigorous flogging. The Ogor surely agrees that sinners taste better after being tenderized with a couple of flails.

I gave the Look-out Grot a Flagellant head and one of the tiny hammers that you can hang to the Flagellant bodies and used the crow's nest from the Ogor banner as a makeshift pulpit to represent Johan. For Barag, I swapped the Ogor clubs for flails, used more Flagellant pendants as hearings and some of the scrolls to decorate his belt. A bit of greenstuff to give him Flagellant style hair and I was ready for painting. 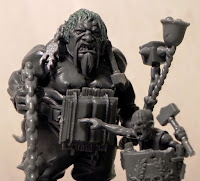 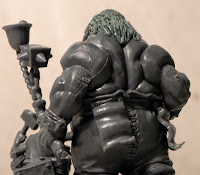 Barag & Johan - WIP
I used the same palette of dirty yellow, green and red I used for the Penitent Brotherhood, but gave Barag a slightly more grey-ish skin. 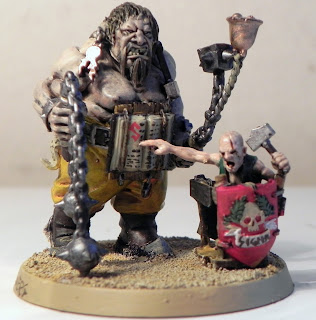 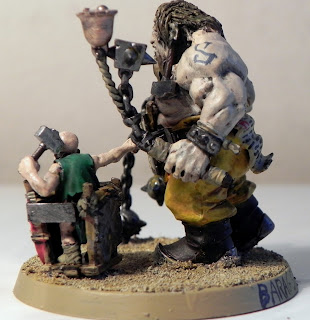 And now, with the five Ogors left on the sprues, I'm going to pay my homage to the 1990s incarnation of Golgfag's Meneaters. 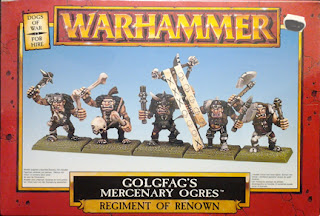 Stay tuned for some armoured, axe and club wielding Ogors!
Posted by Godfather Viktor at 18:28