Skargat Fistbrawler, Mighty Basher of the Quicksilver Drake of the Mercuria Vale, is a successful Ogor mercenary captain. As a young, upstart Tyrant, he led his lads out of Ghur following the rampages of Ugluk's 'Ardfist. There was something in the Warchanter's rythm that captivated the Ogors, but more than anything they were attracted by the shiny orruk-forged armours worn by Ugluk's 'Ardboyz. Over  years of fighting alongside the 'Ardboyz, Ugluk and his lads had forgotten about gold, and the only shiny stuff they cared for were steel and iron. No surprise that, when the 'Ardfist entered Venythian territory, Skargat and his Ogors were positively impressed by the Gilded Hand battlewizards, in particular their ability to turn anything around them into steel and use it against the Ironjawz. Skargat quickly reconsidered his loyalties and with a bellow led the Ogors against the orruks. The ensuing orruk meat feast lasted for three days and nights and the 'Ardboyz gear were taken as spoils of war. The Gilded Hand elders, for their part, have ever since been more than happy to indulge the Ogors' lust for iron and steel. After all, what are such base materials worth for master alchemists?

I had converted Skargat a few years ago and he only needed rebasing for AoS. I clipped the square base he was on around his feet and then with a hobby knife I scored the edges, so that the bit of base left would look like another slab of stone once painted and glued on the new round base. 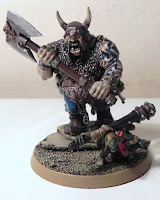 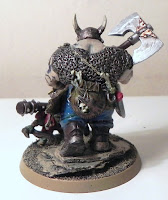 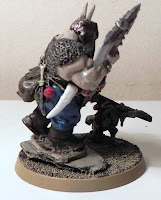 Unlike the 1990s Golgfag he wields a double-handed axe, but he still wears a horned helm, which I made out of greenstuff and the tusks from a Orruk Chariot boar. For a while I used him when playing RPGs and during one of his adventures he killed a young dragon. After that epical fight I sculpted the fang that now hangs from his belt. 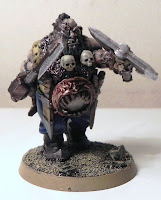 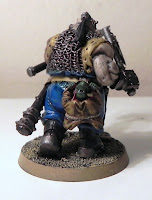 For Kamog, the unit Crusher, I also wanted him to give a hint of the new role played by Gorkamorka as god of all Destruction factions. That's why Kamog's gutplate is painted as copper, so that it reminds the Evil Sun icon. 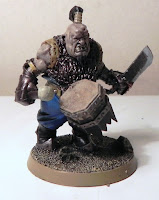 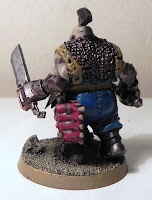 
Rather then painting my Ogors exactly like Golgfag's Meneater with black trousers, I went for a slightly brighter blue to contrast with the dark metal of the chainmail. It's not the best blue I've ever painted, but them being Ogors I can always say that they use poor quality fabric.

That's it for them... at least for now! I've just received my copy of Silver Tower and I'm really exited about it. However, there are 40k models nagging at me and asking why I have forgotten them.

So I guess I'll take a break from AoS and for a couple of months delve into the grim darkness of the far future. Meanwhile, fellow Talers, please show me some more beautiful models!

Posted by Godfather Viktor at 17:58