April was a pretty crazy month. I went to SCGT, finished a bucketload of models for that. I'll get them up in a separate update. For today, I wanted to show off my Nagash, a WIP. 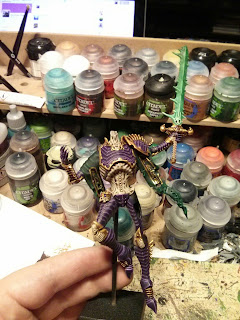 First up's the body. This guy is huge. Purple and green, like the majority of my forces. Gold trimmings, rather than bone. I wanted the look to be ancient glory, rather than grotesque. There's going to be plenty of bone anyways, with the other parts. Sword was painted like my Morghast blades and the GW ghosts. Multiple layers to get the transition. The cloth is similar to most other cloth in the army, but with much more work done. It also has glowing Nehekharan runes. Namely the runes for Eternal Life and Vengeance. The two most important things in the Supreme Lord's life. Next bit is the shroud. Or crown?  Bone-tentacle thingy. Considered painting in in another colour. It's so obviously bone that I ditched that idea. Every single line on that thing is highlighted by hand. I had a minor crisis of motivation about a third of the way through. Looks solid though, and will look nice on the big man. 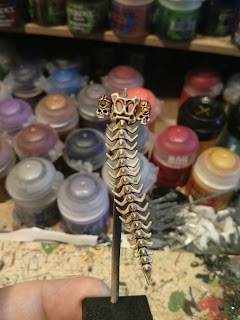 The biggest cod-piece in all the Mortal Realms! All hail! Again done in bone. I guess this one didn't have to be bone, but it would have been a bit much in gold. Gems have three or four layers on them, not that it's visible. 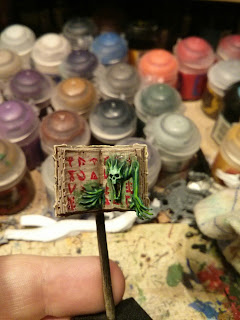 The book! Love the pages and the ghost, but not fond of the hieroglyphs. I figured that when Nagash originally wrote them, he would have done so in Nehekharan, not in Reikspiel. So it had to be runic. But my brush wasn't accurate enough. Might redo this before I'm done, but I'm leaving it for now. All the runes are legit though. Even if they don't actually spell out anything. 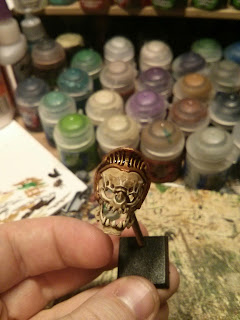 Now for the WIP section. The right shoulderpad. After telling myself "not so much bone", it's all turned up bone. This guy needs a cleanup. But if anyone has any good ideas for how I could paint the shoulder pad instead, please shout out! 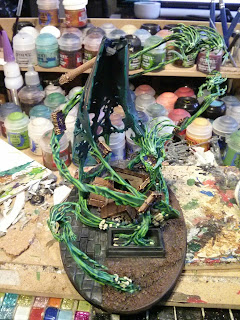 The skirt, spirits and base. Super custom. Garden of Morr bits mixed with reposed spirits. Cutting up such an expensive model was nerve wracking. But the result looks great, and gives him a sense of momentum and faded glory. It also underlines the idea of where Nagash treads, the spirits rise. Some just pop out of the ground, whilst others are sucked from their grave. 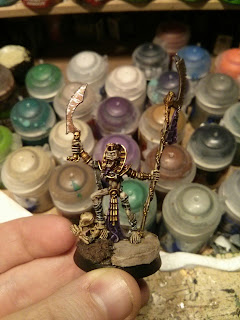 Next up, something different. Needing a break from Nagash, I painted up a quick liche priest. Nothing special, but does the job. Still go to finish the base.