With just over four weeks until the Bristol Smash, my painting table is a flurry of Stormcast Eternals. After the crazy weekend of building heroes, I've now got them all primed and have started putting the basecoats down on them. However the Expansion Box Set with the rest of the troops still remains untouched....this will be rectified this weekend and my aim is to have the rest of it built come Sunday night

In regards to the other units I have managed to finish off a squad of five Retributors and also the four Prosecutors. The Retributors were the easiest to paint, as I knew exactly how I wanted to paint them, mainly silver with a very small amount of gold and teal. It is one of the joys of the Stormcast, you can speed paint them quite proficiently and still have them looking good or you can spend hours upon hours on each model and pick out every single bit of detail. 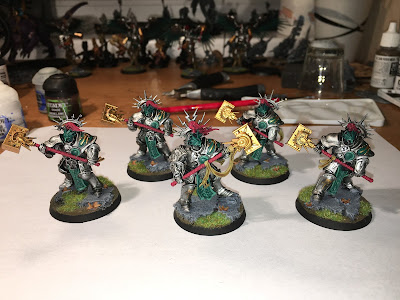 The Prosecutors I really enjoyed painting. They were quite bouncy due to being suspended in air by the scrolls that attach to the base, but it was just a case of holding the scrolls while painting the armour. I tried blending on the wings for the first time in my painting and it didn't come out too bad, I initially tried wet blending but that completely failed, so I progressively drybrushed from the darkest colour through to the lightest. I think it works, and really gives the Prosecutors some impact on the table. 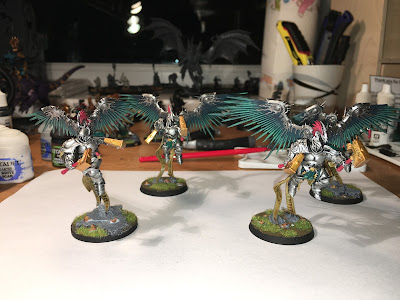 So with those completed I've finished the whole starter set along with the additional models I recieved with my broken sprue. Now onto the additions, four weeks....this should be achieveable....right? 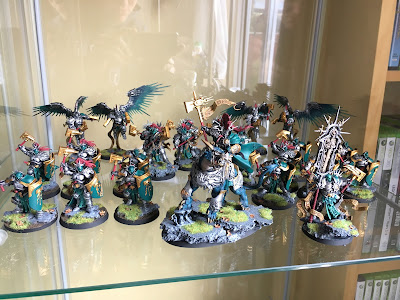 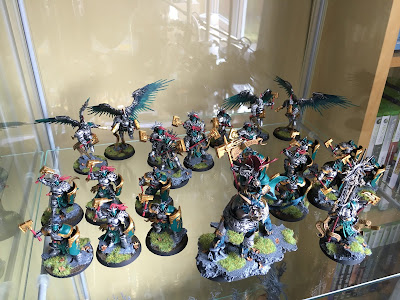