So as I mentioned yesterday now the Stormcast Eternals have been completed my focus has moved to the Sylvaneth. I realised at Bristol Smash that needed more troops for my army and had the Forest Spirit Warhost box (3 x Treemen, 32 x Dryads and 1 x Branchwraith) sitting neglected in the man cave, this seemed like the obvious option to go down rather than buying more Stormcast. 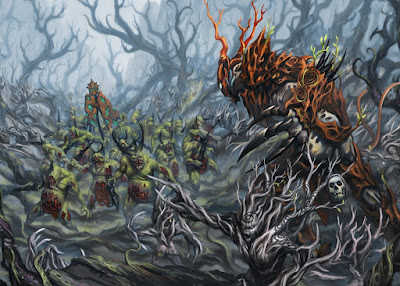 I've always been a fan of the Sylvaneth, the treeman plastic kit is one of the best kits that Games Workshop has released in recent years, it's absolutely stunning and the different poses you can have really give each Treeman character.


It would seem my timing is rather impeccable with the preorders for the Sylvaneth Battletome and new beautiful models going live on Saturday. I've had a good chunk of money put aside for a while now with the whole intention of spending it on a new army launch that peaked my interests. Safe to say that money is being spent completely on the new models this week!


Painting the Sylvaneth I wanted a scheme which was easy to produce but looked quite striking on the table. I knew already that my basing would tie in with the Stormcast with the cork bases, grass and autumn leaves, I wanted to be able to mix the armies together if needs be; there's nothing worse than having a combined factions under one Grand Alliance and the bases are all different, it just makes the army look un-cohesive. 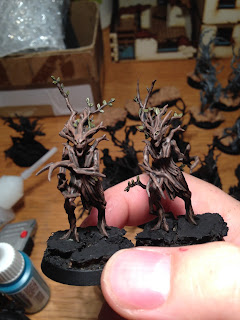 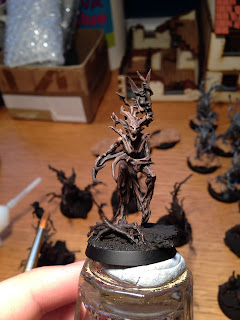 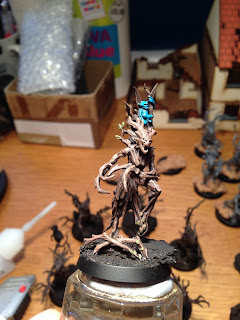 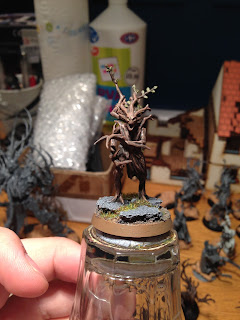 Originally I basecoated the Dyrads with Dryad Bark, overbrushed quite heavily with Gothor Brown and then drybrushed on the raised areas with Baneblade Brown. They looked ok, but in a bit unit they kind of got lost. It was hard to distinguish between the models as frankly they were just different shades of brown. I had a play around with some different colours on a test model, I thought if I could find one colour that makes the models pop then I could use it across the army. I first tried different oranges but they were swallowed up by the browns I had used. 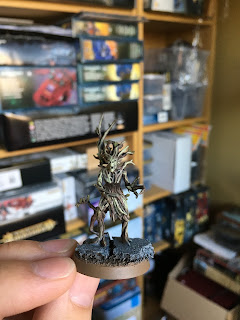 Randomly I picked up Nurgling Green, I’d just finished using it on something else and tried a small area and instantly it made a massive difference! I then proceeded to pick out just the runes on the Dryads with it, they looked ok but it was still lacking an overall ‘pop’. That’s when I decided to drybrush the whole model with it, instantly I knew I’d found my paint scheme. With this step I didn’t need to add the Baneblade Brown and it was relatively fast to paint up 32 Dryads using this scheme.

I did want the teal colour that I used with my Stormcast to tie in with the Dryads, for this I picked out the leaves for that colour. Start with Incubi darkness as the basecoat, followed by Kabalite Green leaving the Incubi in the depths then drybrush on the highest areas with Sybarite Green, with the Treemen and the Dryads having so many raised areas these are the ideal models for this approach. 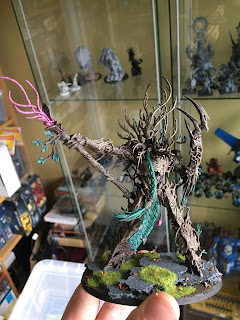 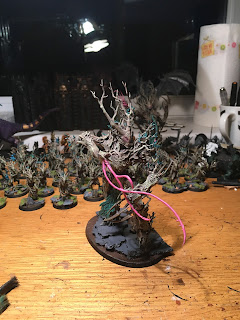 Overall I’m really pleased with this scheme, getting these all painted up over the last couple of weeks have been really easy to do but as an army looks really effective. I’ve replicated the paint scheme with the two treemen I’ve painted up so far and they look great. I added some pink into their models for the vines and eyes just to break up the overall model. 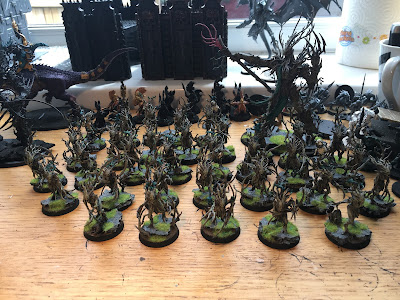 Now to get the Spirit of Durthu painted up ahead of the release of Battletome Sylvaneth, the Drycha, Tree Revenants, Kurnoth Hunters and most importantly Alarielle The Everqueen next week!