Wardens of the Realms - Month 4

To me, playing is the biggest incentive to paint. I usually play only with fully-painted armies, which allows for an organic grow of my forces and battles. The more I play, the more I paint ! Unfortunately I didn't play a lot of AoS this year, and spent most of my time on Warmahordes, which looks like to be my "main game" for the next upcoming months.

Therefore I'm still lagging behind my Tales of Sigmar schedule. I don't know if I'll catch up on my paintjob goals anytime soon, but I keep planning my monthly budget and add new troops to the mix.
Even if I'm not keeping up like I thought I would, this awesome challenge makes me progress on my Stormcast Eternals, prepping them to be painted much faster once I'll be in the thick of things. It's much more than I would have done if I hadn't joined the Tales !
So here is how I spent last month's budget and the state of my forces still on the painting station.

I finally finished the Knight-Vexillor and the Protectors, who look pretty cool to me. I have to work on their backstories know. I'm still brainstorming on the hero but I already know the Protector unit will be the Zweihänders, a former mercenary company who roamed the Realm of the Beasts, fighting with great two-handed swords, before being taken by Sigmar and reborn as Stormcasts. I try to keep a norse/german feeling to my Ghur warrior chamber, hence my choice of names. 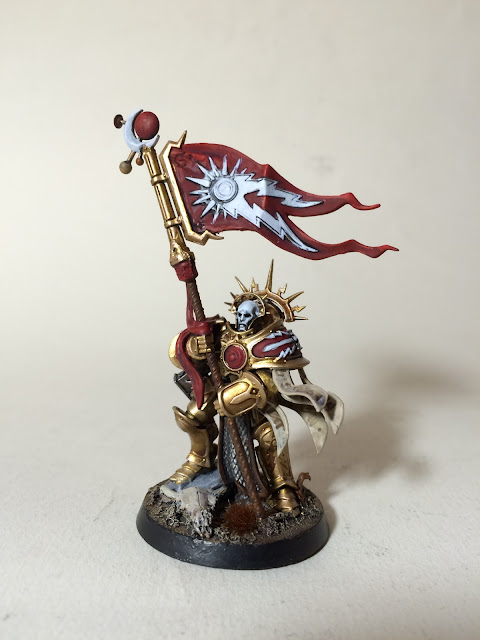 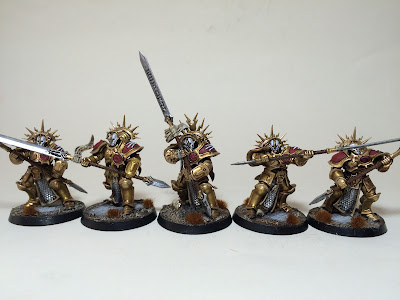 On the WIP side, the picture below says it all : I have started working on my Realmgate, and the other miniatures (Lord Castellant & Gryph-hound, Knight-Azyros, Judicators) are primed and ready to be painted ! 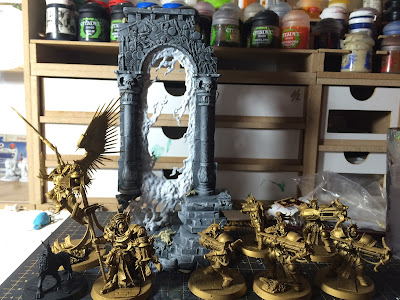 I went for the Knight-Azyros rather than the Venator to cover the more protective and benevolent side of the Wardens of the Realms, but the beast-hunter theme is so fitting to Ghur that its twin will show up soon.
It was also high time to add more ranged firepower to my army, so Judicators were a natural choice. I was more into the boltgun-crossbows design than the classic bows, and delivering a hail of fire at medium distance just after an opportunistic teleport just seemed right to me.

So here we are, the army is growing and will soon have some June reinforcements !
Posted by Jim at 15:11

Email ThisBlogThis!Share to TwitterShare to FacebookShare to Pinterest
Labels: age of sigmar, month 4, Order, stormcast eternals, wardens of the realms