So ahead of Sunday's game, I thought I'd get my Realmgates that I purchased on Thursday speed-painted and tabletop ready. I knew I wouldn't have them completely finished for Sunday but if I could get the basics down and painted up then going back to them at a later date would be easy enough to finish painting them up.

I started by doing what I do with every bit of scenery I own, spray the kit in black undercoat. I use Halfords primer, they do big cans, it's pretty cheap and the coverage is great. I've never had a problem with any of the primers I've bought from them. Leaving the primer to dry for 24 hours, I then gave the whole of the realmgate minus the middle part a basecoat of Games Workshop Mechanicus Standard Grey. After that it's a liberal coat of Nuln Oil wash, this can be rather messy and be prepared to get your fingers covered in it too! Take care not to have the wash pool up on the ledges of the realmgate, I left it to start drying for a few minutes before then going back over with a clean brush and cleaning up the pools of wash that had accumilated. 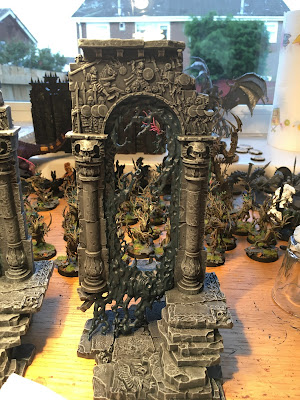 After the Nuln Oil has dried it gave the Realmgates a lot of depth in the recceses. The gates have lots of little bits of detail and this makes them stand out a bit, when I get to go back I can see exactly the parts I need to pick up and paint. A heavy drybrush Administratum Grey all over the model, the drybrush will pick up all the edges of the model and believe me with the Realmgates that's alot! I then wanted to tie in the Realmgate portals with the rest of my armies so gave them a basecoat of Incubi Darkness. 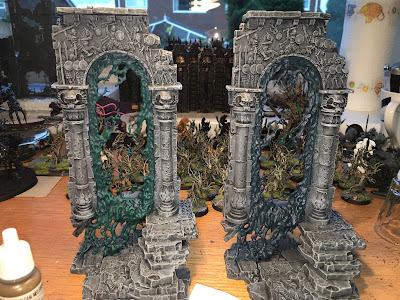 After that I did a heavy overbrush of Kabalite Green over the top leaving the Incubi Darkness in the reccesses of the portal, overbrushing is the same technique of drybrushing but the brush is damp so the paint flows a lot easier and you don't need to 'scrub' like you do drybrushing. These models are really well suited for drybrushes and overbrushing as it has alot of raised edges so it's very easy to pick out the different depths. 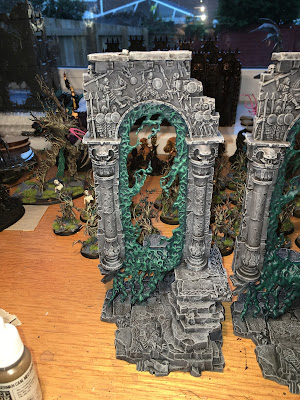 Once the Kabalite Green has dried its a very light drybrush of Sybarite Green on the highest points just to add even more definition to the portal. This is exactly the same technique I've used on the Stormcast and the Sylvaneth and it really works well together. I did consider changing the colours of each portal but wanted it to tie in together. I'll probably get another couple at some point and do them in different colours to fit different realms/armies. 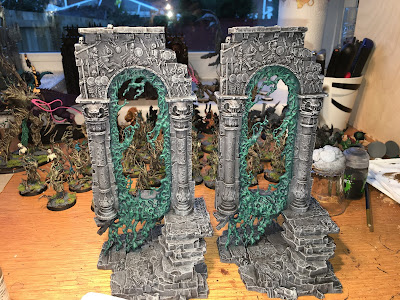 This was all I did for the tabletop standard on Sunday. I want to go back and paint up the symbols and the battle scene either side at the top of the gates. I've also got a plan of adding static grass and dead leaves onto the basing and the steps much like the Sylvaneth and Stormcast, again just tying everything in together.

I would definitely recommend the Realmgates, they're simple to assemble (though a bit warped but easily fixable) and extremely simple to paint up.