So it seems like quite a few people liked the speed-painting guide for the Sylvaneth, I have a feeling with this weekend's pre-orders going up there's going to be a lot of new tree players! 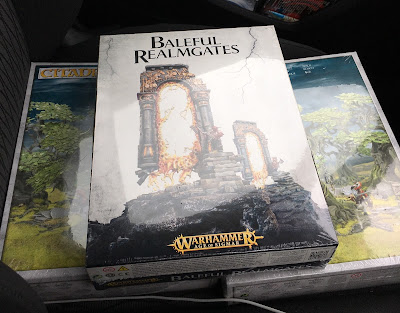 Yesterday I picked up some more terrain for the Sylvaneth, the Realmgates by GW were always on the wish list but never got around to purchasing them. I made amends yesterday by picking up the gates along with a couple more Citadel Woods. I thought if I'm going to be playing Sylvaneth I need to have at least three Wyldwoods on the table to help buff the units and allow the Treelords to teleport across them.

The Realmgates are very easy to assemble, they're big one-piece parts that stick together, all together there's six pieces to a realmgate. One thing that I had on mine and I know a few people have had the same, the pieces were bowed so when you glue them together you're left with huge gaping gaps down the side. Thankfully with some large enough pegs I held the gates together for a couple of hours to make sure they glued fully shut.

I think down the line I'll buy another box set and try to make some Sylvaneth themed ones, I've got an idea of having the realmgate built into the trees, but if I get it wrong it's going to work out as an expensive mistake!

All of my Wyldwoods are made without the leaves on the trees, I've seen a few people's where they've made them with the leaves and after a month or so they've all broken off and looked ruined. I thought I'd just keep the branches bare and anyway I had a plan to use the leaves for something else. 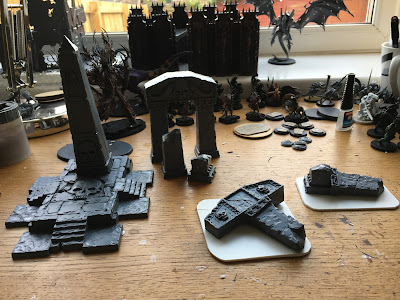 Recently the Arcane Ruins returned to the GW store, this kit at £18 is absolutely fantastic value, you get so much for your money I'm wanting to pick up another one in due course. The Arcane Ruins itself is a pretty easy assembly task with the base being one piece and the archway comprising of 6 pieces. After building that you're left with sprues of additional masonry pillars and archways. 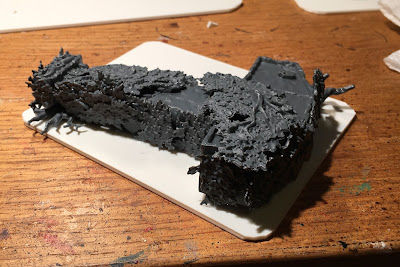 This is where I've started building some Realm of Life scatter terrain pieces. Gluing the pillars and extra bits down onto some bases I then used the leaves and branches from the Citadel Woods to cover the pieces to give them an overgrown look. I think having a table full of these with my Sylvaneth will look really thematic.

Hopefully I can get these painted up this weekend before a big Stormcast/Sylvaneth vs Seraphon battle on Sunday.
Posted by Chalmers at 10:45