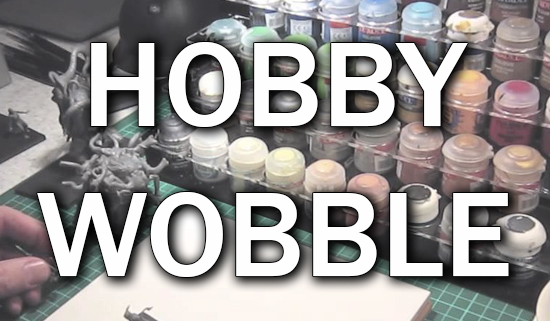 So the great Hobby Wobble of 2016 has hit me full on like a freight train. After buying all my Slaanesh models I got to work on getting them all built up and assembled. The first ten Daemonettes were easy and then I had the joys of pinning the Mierce Miniatures into place, this was actually pretty easy to achieve and gave the models a much more solid base. But then I came onto my nightmare…the Slaanesh Exalted Chariots. The chariot frames and the Seekers were rather easy to put together but then I got to the spiked wheels, each set of spikes was completely separate, needing mould lines removed on each side of the spike and then every piece needed gluing together. I completed the first one after quite a considerable amount of time, my enthusiasm drained a little bit but I persevered dug in and got gluing it together. 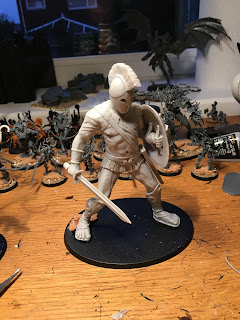 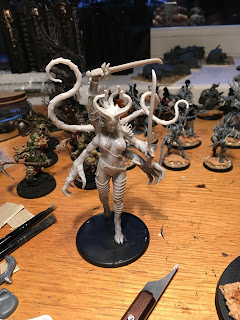 No matter what I tried it seemed like the two rows of spikes just didn’t want to line up correctly with the frame and just as I thought I’d cracked it with one row, then the other row was completely out of shape! After half an hour of fiddling and many profanities, I finally had something that resembled the chariot on the box, though not exactly correct, but worst of all my enthusiasm for getting the Slaanesh ready for Facehammer GT was gone.

The thought of having to sink even more time in making another two of these Chariots was not looking very appealing to me and with a strict deadline I didn’t have the time to faff around with these. So it was back to the drawing board, the Slaanesh have gone in the cupboard and will return after I’ve got the Facehammer GT out of the way. So I had just over six weeks, I needed something easy to make and paint while also being fun to play….enter Beastclaw Raiders. Yep I’ve jumped on the bandwagon of the new shinies and got myself a Beastclaw army. I’ve wrote a couple of lists but I’ve settled on one that comes in at 11 models. Yep you read that right 11. So I ordered the Beastclaw Raiders Icewind Assault box set, another Thundertusk box and thankfully had another still in wrapping from my Ogre Kingdom days of 8th Edition.

My aim for this army was to have it tie in with the rest of the destruction forces and I thought the best way to do this was making all the Ogors into Orruks by swapping out the heads. After Bristol Smash earlier this year and seeing a couple of Ogor into Orruk armies I knew it was what I wanted to do and apart from a head swap everything else stayed the same.

To fit in with the snow theme that the Beastclaw have I’ve decided to paint up my Orruks with blue skin and have purchased the new Shattered Dominion bases and basing kit to add to the character of the army. My aim is to have random parts of the basing kits showing on the floor while the rest is covered by snow and dead grass tufts. Having the army look like they’re marching over a fallen city in the winter. So 11 models in six weeks sounds quite easy to do for an army….

Well it would be, but my army for the Facehammer GT doesn’t stop there, oh no. You see we need to take two lists to the event and use them both throughout. So I’ve decided to embark on the ambitious task of making my second list a mixed Destruction force using Bonesplitterz, Ironjawz and Beastclaw Raiders. This is why I wanted the Beastclaw to fit in with the rest of the army, with them all looking like Orruks and having the blue skin on snowy bases I think the whole army will really look cohesive on the board, despite being a mix of units from the Destruction allegiance. I’m already looking past this event and wanting to incorporate my Moonclan Grots into this army and making them have blue skin too.


This second list is going to be the challenge to get ready in six weeks as it’s a lot more models. Going into a split list like this I needed to find a Battleline unit that could be used, hence the Savage Orruks from the Bonesplitterz. I’ll be producing a second article outlining how each army list is going to look like and the reasons for the choices so stay tuned for that early next week.


I’ve also got some ideas for Beastclaw themed terrain to take to the event, we don’t necessarily need to bring scenery to the event but there’s the opportunity to win prizes if we do bring themed terrain. So I’ve already got some snowy hills being made up, along with this I’m thinking some reptile tank skull pieces mounted on card and then having snow drifts up against them. My other idea is the main altar from the Arcane Ruins set and having that part covered in snow. These are obviously the last of my concerns on getting ready, the main part at the moment is getting those armies built and painted up.