Realms of Chaos - Road to Blood and Glory

So now the very awesome Facehammer GT has been and gone, full tournament report in a podcast episode coming very soon, it’s time to look ahead and decide what I’m going to be working on in the upcoming months.

I think Chaos is going to be the Grand Alliance of choice over for the rest of the year and beginning of 2017. I’ll be doing two different armies over the next few months in preparation for both the Blood and Glory event in Derby at the end of November and also the Realm Hoppers narrative event hosted by HobbyHammer in February.

The plan for Blood and Glory is bring along a full Skaven Pestilence list for the 2,000pts Championship event. I’ve got all the models and decided on a list, I’ve even got themed terrain planned. But with six weeks to go (I see a reoccurring theme here for every event) I’ve got the whole army to build and paint up. 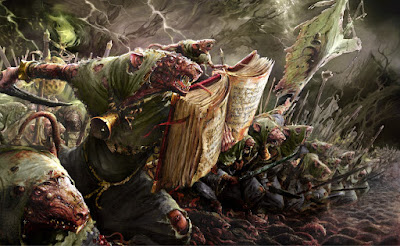 Thankfully the core of the army is 110 Plague Monks and they’re pretty easy to batch paint up. Along with that I need a Plague Priest, two Plague Furnaces and three Plagueclaw Catapults. It’s no piece of cake I assure you but by painting 20 Plague Monks up at a time I should have more than enough time to get it all sorted. My plan is to get everything built so I can get some practice games in and then paint up the army unit by unit. I think with so many Plague Monks I might do a unit of 20 and then ‘reward’ myself with one of the bigger models in the army.

As mentioned I’ve got plans for terrain to bring to the event too. My idea is to have a Skaven warpstone mining theme. I’ve bought a TT Combat Wild-West Industrial mining kit, it has railroads, mining carts and walkways. I’m hoping adding some warpstone crystals, some rats and the like I’ll be able to turn it into a Skaven mine. I’ve also got a lot of larger Warpstone Crystal chunks from the Dice Bag Lady which will be used as scatter terrain for warpstone ‘fields’ on the table. If I pull it off it should look good. If it looks questionable I’ve got the normal AoS terrain to fall back on and use. 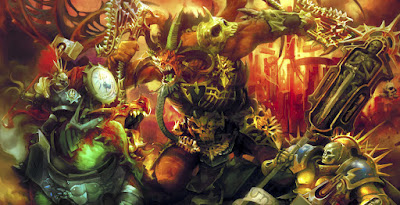 For the Narrative event in February I’m going to be bringing a Skarbrand-led Khorne alliance. My backstory is that Skarbrand, being exiled by Khorne himself is starting a Khorne Rebellion and the Daemon and Bloodbound forces are coming to follow under Skarbrand. Again I’m planning some Khorne themed terrain and objective markers and cannot wait to get into this. I’ve already made a start on a start collecting box set. I’m hoping to have the majority of the army done way in advance, and hope that a certain Santa Claus helps out the Mrs and Skarbrand himself is sitting under my Christmas tree this year.

On top of all of this I’ve finally managed to get the Newcastle Warlords Wargaming Group set up and running. Our first night will be next Thursday October 20th and so far we’ve got a good mix of people attending with AoS games being organized as well as 30K and Malifaux. We’re going to be meeting every three weeks and I’ve been busy getting boards put together and trying to stockpile and paint as much terrain I can muster over the last few days. So it’s all hands on board to get the first club night running smoothly and without a hitch. Then the road to Blood and Glory begins!