The Waaaggghhh Takes Over - Road to Blood and Glory 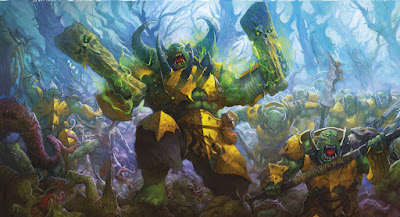 So I’ll admit trying to build 110 Plague Monks was going to be a tough task to get done for Blood and Glory and it’s officially broke me. Don’t get me wrong I really want to get the Clan Pestilence army done but I think this is going to have to be a slow grow project rather than rushing it out for a tournament.

Thankfully I’ve been getting through all my Ironjawz over the past few weeks and now with just under three weeks to go until the tournament I’m well on schedule of having a full Ironjawz army ready for the event.

This is the first time I’m going to be using a Batallion in a game and with it I now have a 5-drop army. But I really think you’re going to struggle to build a competitive Ironjawz list without the Ironfist Batallion. Basically it gives you an extra D6” movement in your hero phase on all of your Brutes and Ardboyz, plus one of the Brutes can become a Big-Boss and has 5 wounds instead of 3. And yes that extra D6” stacks with the Destruction Rampaging Destroyers allegiance ability allowing them to move 2D6”+2” (because of Ravager trait) in your Hero phase, meaning suddenly your 4” movement Orruks are one speedy mob!

Attending Facehammer GT with a mixed Destruction list the D6” was great to get up the board Turn 1 so I can imagine how quickly the Ironjawz are going to be in the face of the opponents/getting straight onto objectives at Blood and Glory.

I’ve chose the Megaboss on foot as my General mainly because the Megaboss on Grumpkin (Grumpy Pumpkin) is too much of a fire target to be kept safe. Plus you want the Mawkrusha up the field rather than babysitting it from things such as teleporting Retributors which happened in two games at Facehammer. So I’ve given the extra artefact to my Mawkrusha and given it the 4+ save against Mortal Wounds. It’s still probably going to die most games and it is a lot of points, but hopefully it’ll prove a big enough distraction piece for the rest of my army to do the business up the field.

Now you’ll notice a lack of Gore Gruntas in my list and an abundance of Ardboyz. I absolutely love the Gore Grunta models but their rules are just a little meh. For exactly the same cost I can run a 10-man Ardboyz unit that has 20 wounds, and depending on what weapons I’ve given them either 20 or 30 attacks. And in the General’s handbook where most models hold objectives have three units of 10 Ardboyz will be good objective grabbers compared to the 3 Gore Gruntas.

I’m excited to use a big block of 10 Brutes. They were really good as a 5-man unit at Facehammer GT so I’m hoping having a big block of 10, buffed by the Warchanter and supported by the Megaboss on foot they’ll be able to really deal out a lot of damage. My 10-man unit will be equipped with the Gore-Hackas for the extra reach, while the 5-man unit will be equipped with the two hand-weapons to deal out more attacks per a model.

So exactly what do I have left to do for Blood and Glory?

Well I’ve got to finish painting up 15 Ardboyz, build and paint another 15 Ardboyz. Then base the rest of the army. Thankfully I’ve already painted up the extra 10 Brutes, Warboss and Warchanter and I already had the Mawkrusha, 5 Brutes and Weirdnob Shaman painted for Facehammer GT. I'm actually quite ahead of schedule and hopefully by the end of the weekend, the 15 Ardboyz will be finished and the other 15 will at least be primed, maybe basecoats put down on them.

I’ve already signed up for the 1,000pt and 500pt events on the Friday too. My original plan was having different Grand Alliances for each event however I have a feeling I’ll be chopping and changing my Ironjawz to fit in each tournament. At least that way I’ll have some practice for certain units in the army before the main 2K championships on the weekend.
Posted by Chalmers at 11:53 No comments: